A student on the trip, Sheba Najmi, wrote an as yet unpublished article for the campus magazine which includes these descriptions:

“Yes, Ranger, we’d love it if we could follow you to our group campsite!” Denie exclaimed. It was late on a cold Thursday night in mid-August when, armed with hand-drawn maps, one of the De Anza Outdoor Club carpools pulled into Group Campsite C at Tuolumne Meadows. Though famished, their first order of business was stowing all food in metal bear boxes, followed by pitching two six-person tents in the luminosity of a lantern and a couple of faint flashlights. That night was freezing cold, but by the next night, the students had figured out that the trick to sleeping warm was to eat plenty before going to bed. And a plenty they partook of smores (new to many on the trip), cookies, nuts, and sweet potatoes around the nightly campfire.” 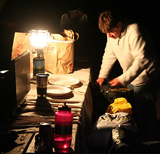 Friday Tuolumne group photo on Tenaya Lake with Mount Hoffman, our destination the next day, in the background. 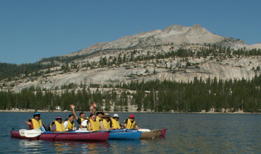 “The water was freezing but everyone braved it for the sake of swimming pictures in front of the waterfalls, albeit amidst much screaming.” 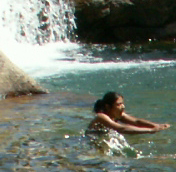 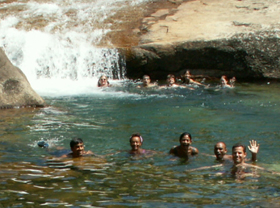 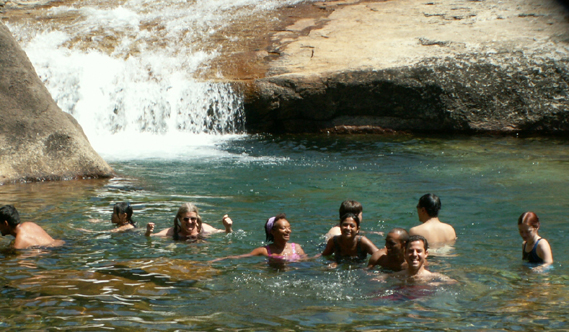 “The cool swim was the perfect build-up to lunch in the sun, slapping on fake tattoos, painting toenails, and soaking up the rays.” 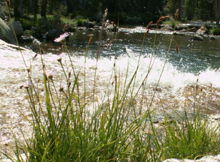 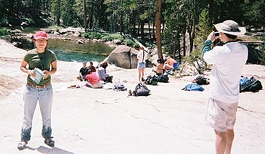 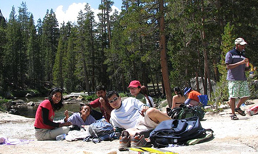 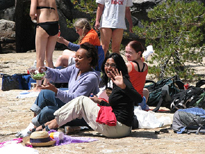 and on the summit a little over 24 hours later: 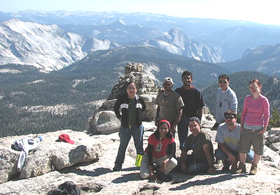 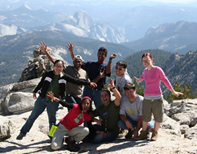 “Saturday’s 8-hour hike up 2000 feet to Mount Hoffman’s summit proved the most strenuous. Some of the camp decided to stay partway at May Lake with its pristine surroundings at an elevation of 9,325 feet. Nine trudged ahead alongside marmots, over slippery gravel and loose rock, to the snow-capped peak at 10,850 feet. The spectacular view of Half Dome from the top provided a rewarding, different perspective than the better-known view of it from Yosemite Valley.”

“The night skies were brilliant with stars, as the De Anza students huddled around a campfire and attempted to map the constellations to those in the guide books. On the last night, each student took turns acknowledging the best part of the trip for them. For some, it was the swimming hole; for many, the hike and the views. But each remarked that it was indubitably the company of the strangers-turned-friends that made the adventures worthwhile.”

“Campfire is essential to camping. Without it, we would just be sitting around in the dark, and freezing.” 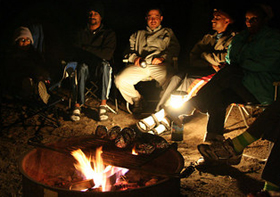 “The Club is particularly welcoming of those with no camping experience, which makes for a friendly mix of beginners and grizzled backpackers… Ten of the nineteen people on the Tuolumne Sierra trip had never been camping before; the age range was 17 to 58.” 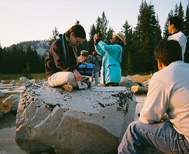 Sunday, after packing up the campsite, brunch at the Ahwahnee hotel and rafting on the Merced River in Yosemite Valley (unfortunately some of our rafts barely held air): 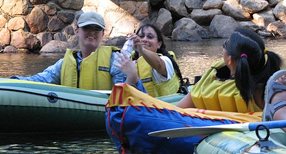 Photos on this page are by many of the people on the trip, (William Chan or Vilma Estacio or Sheba Najmi or …) but we are not completely sure who took which, as various cameras were shared.