I’ve been on the faculty at De Anza College since April, 1988,
first in Physical Education, then in Biological and Health Sciences as well.

I am a member of the De Anza College Academic Senate Executive Committee (since 2012).

I have been a lifeguard, lifeguard captain or in charge of the swim, at 53 triathlons or open water swims, (and my lifeguard training graduates have joined me for many of the following), including the Danskin Women’s Triathlon (6 years), National Triathlon for the Physically Limited (4 years), Bud Light (4 years), All For Kids Day (2 years), San Jose International (2 years) and the 25th Anniversary Far West Games (1992). My husband and I were lifeguard/swimmer escorts for a “Pier to Pier” 6 1/2 mile swim from Capitola to Cowell’s beach in Santa Cruz in 1998. In 2000 through 2013 De Anza College-trained lifeguards volunteered at the Escape from Alcatraz ‘Sharkfest’ swim (and/or the the Alcatri triathlon) from Alcatraz to Aquatic Park in San Francisco, and/or the Golden Gate Bridge Sharkfest swim from the south tower of the bridge to Sausalito. In 2009 we guarded the summer National Senior Games Triathlon when it was held in the S.F. bay area. 2004 through 2014 we guarded (and I was lifeguard captain for) the Silicon Valley Kids Triathlon. In 2017 we guarded the Escape from Alcatraz again. And we guarded the California State Community College Swimming and Diving championships held at De Anza College in May 2018 / May 2019 and the Golden Gate Sharkfest July 22, 2018.

I swam competitively in high school and was Sports Editor (as well as Editor-in-Chief and News Editor) of the De Anza newspaper (La Voz) as a student here.

Below: my editor photo at the La Voz (De Anza College student newspaper) office at age 19. 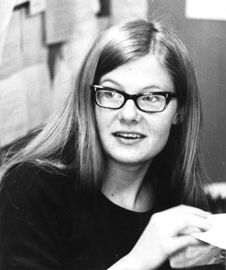 I am a graduate of De Anza College, as is my husband who I met at De Anza on the campus newspaper. 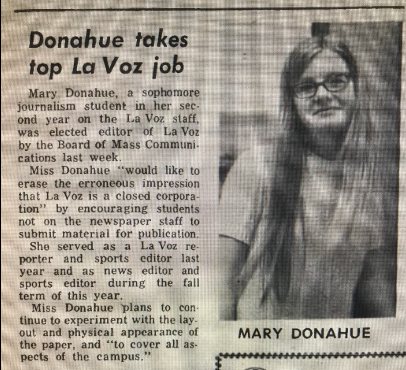 I was Girl Scout Counselor-in-Training in the Santa Cruz Mountains for two summers, worked at San Jose Family Camp for one summer and as a Girl Scout Camp Counselor in Idaho for two summers. At the camp in Idaho I was half of a team that were champions in blindfolded rowboat racing.

Below a typical home for the summer, this one in McCall, Idaho.

After completing Community Emergency Response Team (CERT) training in 2002 I worked many years as a volunteer at Campbell/Cupertino/Saratoga/Los Gatos/Monte Sereno (CERT) training exercises.

In 2003 I became a volunteer trainer (instructor) for Campbell CERT, primarily in Disaster Medicine.

I was given a “2004 Volunteer of the Year” award for CERT work in Campbell
from the Santa Clara County Emergency Managers’ Association.

I am currently a volunteer with Cupertino CERT and Cupertino Medical Reserve Corps.
(At a first aid station I volunteered at for a Habitat for Humanity fundraiser walk / run
we gave out more chocolate chip cookies than band-aids.)

In 2005 I earned my FCC element 2 technician class radio license. 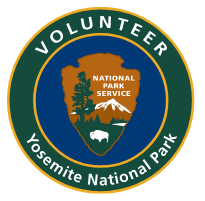 I first became a volunteer in Yosemite National Park in 2006 and have been a volunteer on and off for 10++ years, including five years with Preventative Search and Rescue when it was was initially fully funded in the park.
https://yosemite.org/psar-keeping-you-safe-in-yosemite/

Below, April 1969, a Sierra Club and Sempervirens Fund project, at Big Basin State Park, building the Skyline to the Sea trail (nearly 50 De Anza students participated, including members of the “Los Montaneros Camping and Climbing Club,” the precursor of the Outdoor Club). Left to right, students Mary Donahue, Jo Ann Siebert and Sue Blair. Photo by Judy Shapero.
Yes, we cleared and got rashes from poison oak. 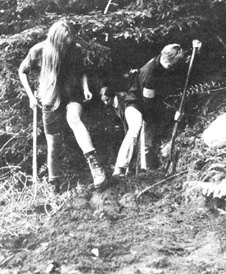 In 2021 I received a Certificate of Recognition from the City of Cupertino:

“In recognition of your participation as a Cupertino Citizen Corps Volunteer at COVID-19 testing sites from June 2020 through February 2021. The City of Cupertino thanks you for your continued service during the COVID-19 pandemic.”

I described my work as “greeter, educator and bouncer.” 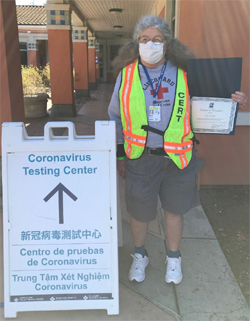 In my spare time I work on the Ultimate fixer-upper.

Below, on San Francisco bay: 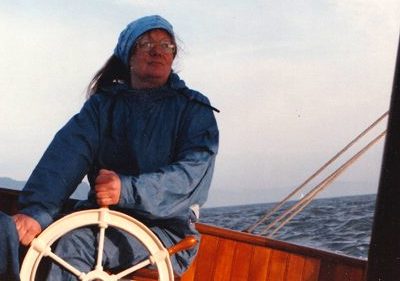 Never turn your back on the ocean and you won’t get caught by rogue or sneaker waves.

Always use waterproof sunscreen. (SPF 5 and 15 are jokes.)

Two-thirds of drowning victims are good swimmers. Why you should wear a lifejacket.

Quit being paranoid about sharks

Chocolate is a food group.

Start your day with a liter of water.

Never hold your breath when you lift.

Play with your food.

Learn how to say no effectively.

It’s never time to give up.

You’re never too old to learn.

Don’t use a chainsaw indoors. Don’t try to weld a gas tank, even if you are sure it is empty.

Don’t be one of the people who puts their fingers in the boiling pools in Yellowstone to see if the water really is that hot. Road trip advice and etiquette

If your budget comes up short and you think you have to drop out of school, drop back in.
Take at least one class every quarter/semester/session, so you stay in the program.

From the 2002 U.S. Census Bureau Report we learn that over a period of 40 years,
people holding bachelor’s degrees earn 2.1 million dollars,
people with a master’s will earn 2.5 million dollars
and with a doctorate 3.4 million.

Spelling counts. If you can’t write well with proper spelling and grammar it will hold you back in anything you try to do.

Give Blood. Only about 5% of eligible donors give blood. It’s estimated we need an average of 34,000 units of blood per day in the U.S. It only takes about an hour, and the Red Cross on North First Street, which is certainly on some kind of a work or shopping commute you take, has a huge supply of OJ, lemonade, chocolate chip cookies (and new & old magazines if you forget to bring some homework or want to catch up on your trashy reading). If you’ve never done it, it doesn’t have to be intimidating or scary! For info on what happens, go to: Blood donation FAQs

Put off getting your first tattoo until you have given blood a few times. You probably won’t want to stop giving blood and will opt for the temporary tattoos instead.

(Allow me to update Mahatma Gandhi, who said:

— Study, manage your money and exercise as if you will live forever.

Play as if you will die tomorrow.

“The idea is to die young as late as possible.” Ashley Montagu

NOLO Press has an online legal encyclopedia that has “Plain-English articles on the legal topics that affect you most.”

Has an astronaut’s view of De Anza. The north/south axis is reversed from what you are used to seeing on a map, south is at the top of the page. Steven’s Creek reservoir is the dark blue shape on the right. The main roadways showing are 280 left to right across the page and 85 towards the right side top to bottom. If you look a little closer you can spot Steven’s Creek Blvd and find De Anza at Steven’s Creek and 85.

The whole index to a quarter million space photos is at:

At the site you can become a member of the Yosemite Conservancy and get a discount on books, postcards, etc. at Yosemite visitor centers and most other national parks.

Give me proof you’re such a great teacher

Keep trying even if it takes a few tries, it will be worth it.

Photo below courtesy of the California Department of Public Health.

If there are a multitude of items on the ballot and you only vote on one of them,
your vote will still be counted.

If you are homeless, including living out of your car, you can register to vote.

There is no literacy requirement.

If you are 16 or 17 years old, you can pre-register to vote and you will automatically be registered to vote on your 18th birthday.

The main deadline to register to vote for any election is 11:59:59 p.m. Pacific Time on the 15th calendar day before that election.

If you are registering or re-registering less than 15 days before an election you will need to complete the same-day voter registration process and request your ballot in person at your county elections office or polling location.

BUT you can register to vote on election day as well.

You can register to vote online, (using a computer, iPad, tablet or smartphone) at http://registertovote.ca.gov

There actually have been elections that ended in a tie, in part because many people did not vote.

From Rock The Vote: “Millennials have the potential to be the largest voting bloc in our country but are voting at a fraction of their size, with an estimated 30 million young people staying home in 2012.”