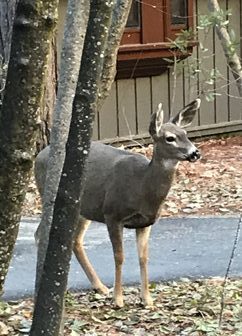 Yosemite National Park tells us: “While deer in Yosemite may allow people to get close, they are very unpredictable and dangerous. Keep your distance, even if they approach you, and remember that federal law prohibits approaching or feeding any wildlife in Yosemite. Obey speed limits and watch roadsides: deer are often hit by cars in the park.” 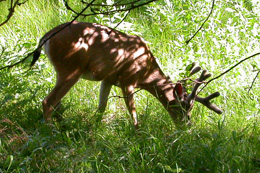 From the Yosemite Daily report

The opportunity to observe wildlife at close range is a vacation highlight for many visitors to Yosemite. Unfortunately, some visitors carry this experience too far by getting dangerously close to the wildlife, which places both them and the animals at risk. This is especially true with the mule deer that frequent developed areas in Yosemite Valley.

Visitors need to be made aware that even though the deer may appear ” tame,” they are wild animals that can inflict serious injuries. The only wildlife-related fatality in Yosemite’s history occurred when a young boy was gored while feeding a mule deer buck.

The risk of similar incidents is especially high in the fall, because this is rutting season, when bucks become more aggressive as they compete for females. However, the danger also exists with does, which are also capable of injuring people with their hooves. The number of deer in developed areas also tends to increase in the fall, as they seek fallen acorns. This further increases the chance of human-deer conflicts.

I’m sending you this message because we have had frequent deer sightings near the Park Administration building and in the Mall area. Visitors have also been approaching these animals too closely. If you notice visitors doing this, please stop and take a moment to courteously explain the dangers involved. 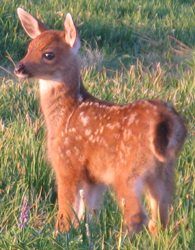 Fawns (baby deer by themselves are not abandoned)

From the Yosemite Daily Report:

The first week in July 2018 “marked the first fawns of the season being born in Yosemite Valley. Fawns are born relatively scentless and are camouflaged to hide from predators. When approached by a human their natural response is to remain still and silent, and try to hide. Adult female deer do not remain close to their fawns in order to prevent drawing attention to them, but do return throughout the day to nurse. If you find a fawn, keep your distance and do not approach it. It’s mother will be back for it. If you disturb or move a fawn, the mother will not be able to find it. (C. Lee-Roney)”

“It’s fawning season! Over the next couple weeks, female deer will begin having fawns. It is normal in Yosemite Valley for deer to give birth in human populated areas, such as next to a building. The mother deer will closely guard a newborn during the first 10 days of its life, when the fawn remains mostly still. The mother will often leave the fawn bedded down in a safe location while she forages for food elsewhere. This is normal behavior, the fawn is not abandoned, and the mother will usually return after a short while.

If you see a fawn, please do not approach it, do not touch it, and do not pick it up!!! The mother may not be visible, but she is in the area. Please ask visitors to keep their distance, as a mother deer can become aggressive in protecting her young.”

“Please do not touch or pick up baby birds, fawns or other young wildlife.

This time of year, many baby birds, fawns, and other young wildlife can be found on the ground. These animals may appear to be in trouble, but are NOT orphaned, sick, or injured. These animals should be left alone. They should not be moved or handled. Otherwise, their parents will not be able to find them and continue to care for them.

When birds first leave the nest, they are often not yet able to fly. They will remain on the ground or in low bushes, and the parents will continue to come back and feed them. Leaving a baby bird where you find it is the best way to ensure that it continues to get the care it needs to survive.

Deer fawns are born relatively scentless, and are brown with white spots. These characteristics are adaptations that allow the fawn to conceal itself from predators. The mother deer do not always remain close to their fawns in order to prevent drawing attention to them, but they will return throughout the day to check on them, and to nurse. Even when approached by humans, these fawns will remain still and silent. When people are around, a mother deer may either become aggressive in order to protect her young, or stay away for longer periods of time, which will prevent the fawn from nursing regularly.

During this vulnerable time in the life cycles of various wildlife species, dogs, cats and even people can pose a serious danger. Please help these baby animals survive by keeping pets on-leash or indoors, and leaving the area immediately when you find one so the parents can continue to care for their young safely. Young animals “rescued” and brought to Wildlife Management often do not survive because they can no longer be cared for by their parents. If you have concerns about an animal in the park, contact a ranger and describe the situation, but please do not touch the animal, pick it up, or move it!” 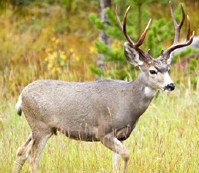 see also: How to not collide with a deer with your vehicle.

It includes: “Every apple core, french fry, and smelly sandwich wrapper tossed out of a car attracts wildlife to roadsides—often with fatal results. Never throw litter from your car.”

Deer whistles have their advocates, but the Insurance Institute for Highway Safety says there’s no scientific proof to support claims they prevent deer from approaching cars or reduce crash risk.