When shopping for spray mosquito repellant I noticed a big cost difference between some kinds. I had thought I’d noticed previously that some brands worked better than others and I already had a personal favorite. So I read the labels on two name brands and finally saw why I’d noticed one was more effective at repelling mosquitos than the other. One had a much greater percentage of the active ingredient N, N-diethyl-m-toluamide.

Then I read the can for the housebrand spray. The same 21.85% as one major brand and distributed by XYZ, a division of the same company as the major brand. Could it be virtually the same product for less money? Read some labels for yourself. Also note that the same major brand, with a different style/name can have different percentages of the active ingredient.

Especially read the part that says to not spray it directly on kids’ hands, since they put their fingers in their mouths so much.

Read also the directions for suncreen with repellant. Because of the precautions we don’t use this kind, instead we choose to put on sunscreen separately first, then a repellant when it is needed.

“DEET/sunscreen combination products are not generally recommended, because DEET can decrease the efficacy of sunscreens. As well, sunscreens should be used liberally and often while DEET should be used sparingly and only as often as required. If application of both is necessary, the Canadian Dermatology Association recommends that the sunscreen be applied first and allowed to penetrate the skin for 20 minutes, prior to applying DEET.”

A consumer phone line told me that the active ingredient doesn’t expire, so you can use last year’s can this year with confidence.

How long does it work?

The New England Journal of Medicine reported that repellants with 24% DEET worked for five hours and those with 5% were effective almost 1 1/2 hours. Others (synthetic, citronella, soybean oil based) worked 20 minutes to 1 1/2 hours.

and from a West Nile Virus fact sheet:

DEET can damage Spandex, rayon, acetate, waterproof coatings and the plastic in sunglasses.

Brightly colored clothing, flowery prints and black attract insects more than white, green, tan or khaki without prints/patterns. Wear shoes and keep arms and legs covered if possible. Long-sleeved shirts and pants work to some degree 24 hours a day, but we counted fifty mosquitos in my husband’s back during a lunch stop up on a Mount Rainier trail.

In brush, put your socks up over pant legs.

Perfumes in lotion, suntan lotion, deodorant and other cosmetics attract.

Don’t bring clothes camping that have been rinsed or dried with mosquito-attracting scented softeners (plus, dryer sheets can make a greasy stain on clothes if they get stuck to them, and the softeners can decrease the lofting and wicking of garments).

My allergist told me to take vitamin B1 for a month before camping trips, but a brochure on West Nile virus from the Santa Clara County (California) Vector Control District said “Vitamin B1 and ultrasonic devices are not effective in preventing mosquito bites.”

Along with adults wearing long sleeved clothing and using an effective repellant, it recommends “place mosquito netting over infant carriers when you are outdoors with babies.”

Food attracts, store it in closed containers; avoid open garbage receptacles. We’ve had some success when we grill a salmon by leaving the head a bit of a ways aside awhile before we start cooking to attract any yellowjackets to it instead of our meal. (Of course we don’t set it where it will simply attract insects to other campers and of course we pick up the head after the meal and we wouldn’t do this where or when there was any chance of an animal finding the head.)

A fact sheet on the subject of yellow jackets from the Santa Clara Valley Urban Runoff Pollution Prevention Program said, in part:

“Outdoors do not drink soft drinks or other sugary drinks from open containers. Use cups with lids and straws, and look before you sip. Do not carry snacks containing meat or sugar in open containers.

Always examine wet towels or wet clothing before you pick them up outdoors.” 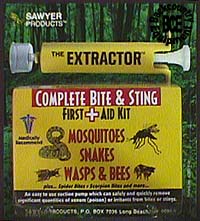 I don’t accept advertising on this website or payment to promote products, but I would like to recommend one to you. My first yellow jacket sting (years ago) had a big reaction. Then I heard about and bought a Sawyer Extractor and I carry it on my person all the time. The next two yellow jacket stings over a couple of years have had barely any reaction because I used the extractor quickly.

In response to a question about bears being attracted to citronella, in the February 2003 issue of Backpacker magazine the “bear expert” wrote about “several years” of research in “Alaska to test how bears respond to different sights, sounds and smells. Citronella powerfully attracts some male and female bears. For some individuals of both sexes, it elicits rolling and rubbing that can last for 5 to 10 minutes… We know of no attacks on people triggered by wearing citronella, but because of its bear attraction power we don’t recommend wearing it in bear country.”

From the New England Journal of Medicine: “Although concentrated DEET formulations protect longer than those that are more dilute, little improvement is offered by concentrations of the active ingredient higher than 50 percent. The transient protection offered by dilute preparations, however, can be extended by reapplication.”

there is more from the New England Journal of Medicine at:

“use DEET-based products as repellents on exposed skin. The higher the concentration of DEET in the repellent formulation, the longer the duration of protection. However, this relation reaches a plateau at about 30% to 35%. DEET formulations that are “extended duration” (ED), such as polymers, are generally considered to provide longer protection times, and may be associated with less DEET absorption.”

The following are general mosquito precautions:

When weather permits, wear long sleeves, long pants, and socks when outdoors. Mosquitoes may bite through thin clothing, so spraying clothes with permethrin or another EPA-registered repellent will give extra protection. Read the labels before use.

For Information on Zika: Zika virus is primarily transmitted to people by Aedes aegypti and Aedes albopictus mosquitoes (the same mosquitoes that can transmit dengue and chikungunya viruses). These urban mosquitoes (not native to California) have currently been found in 12 California counties, but no Zika-infected mosquitoes have been detected in California. The CDC has issued a travel alert for people traveling to regions and certain countries where Zika virus transmission is ongoing. (M.Weiburke)”

Also from the New England Journal of Medicine:

“DEET is far less toxic than many people believe. Adverse effects, though documented, are infrequent and are generally associated with gross overuse of the product. The risk of DEET-related adverse effects pales in comparison with the risk of acquiring vector-borne infection in places where such diseases are endemic. Users should avoid the temptation to apply the most concentrated formulation available and, when using a more dilute product, should reapply it as protection wanes. Alternative “natural” products generally fail to live up to their reputations for greater safety and effectiveness and offer their users a false sense of security. “

Read more from the from the New England Journal of Medicine at:

A Centers for Disease Control article on DEET said in part:

“Because DEET is used directly on human skin, scientists have thoroughly studied its toxicity. Over its long use history, relatively few confirmed incidents have been reported when DEET is used properly.”

Big Medicine.ca reported that on May 9, 2006, mosquitoes in Tennesee were found to have West Nile Virus. “Last year, a case of St. Louis encephalitis (SLE) also was reported in Tennessee. SLE is caused by SLE virus and is transmitted by mosquitoes as well. The same precautions should be taken for SLE as for WNV.

“Most mosquitoes species likely to transmit West Nile and St. Louis encephalitis viruses bite at dusk and dawn,” said Dr. Abelardo Moncayo, state medical entomologist. “People encountering such mosquito problems should use insect repellents containing either DEET, Picaridin, or oil of lemon eucalyptus. These ingredients are very effective when used in accordance to the label’s instructions.”

There are guidelines for use of the recommended products. Neither DEET nor Picaridin should be used on infants younger than 2 months; oil of lemon eucalyptus should not be used in children younger than 2 years of age. No product should be placed around the mouth or eyes at any age. DEET at 30 percent is the maximum concentration recommended for children and infants over 2 months of age. Picaridin is found in repellents worldwide and was distributed in the U.S. for the first time last year. Oil of lemon eucalyptus can provide protection time similar to low concentrations of DEET.”

The fact sheet at: http://www2.state.tn.us/health/FactSheets/wnv.htm

· “Limit outdoor activities between dusk and dawn, if possible, since this is the time of greatest mosquito activity

· If you are outside when mosquitoes are prevalent, wear protective clothing such as long pants, long-sleeved shirts and socks.

· Use a mosquito repellant that contains DEET (the chemical N-N-diethyl-meta-toluamide) and follow the directions on the label.”