This is a collection of pictures of lifeguards and facilities that have flaws in their safety for use by my lifeguard training students when we discuss lifeguard management. 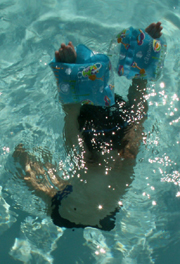 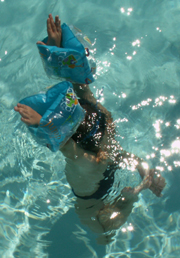 This next photo of a lifeguard at the same national park pool using her rescue tube as a footrest instead of having it in her lap, ready for use, was taken at the same pool as the one above of a child in waterwings on his own. 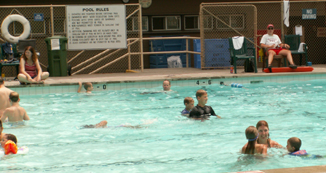 And at a California University, a lifeguard on duty with her feet on her rescue tube. My students tell me they have seen guards at this facility with their feet on their rescue tube AND talking on a cell phone. The lifeguards are often on duty alone and responsible for an entire olympic sized pool, about 25 yards by 50 meters.

Below a picture of a pool office with a big corner window that would allow the manager to watch the guards/patrons/lessons, except that it has so many flyers posted in the windows, and a big display just outside, that the view is blocked. 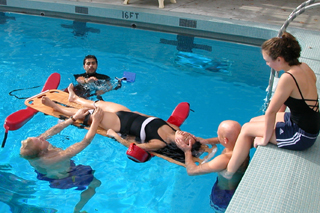 I saw a group photo of backboarding posted in pride at a website.

Yet I was troubled that the guards were not doing backboarding properly, whether they were Red Cross, YMCA or Ellis guards.

The girl sitting on the side of the pool should not be holding up the guard at the head with her feet in his armpits. The guard at the closer side of the board does not look as if he has a strong enough kick to do strapping without the support of a tube.

So I had some of my students recreate the picture I saw at the other website and it is now a part of my Backboarding mistakes quiz. 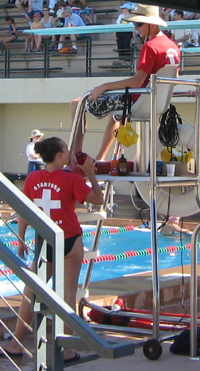 In American Red Cross Lifeguarding we read: “While scanning, do not be distracted by people or activities. Keep focused on the assigned area of responsibility.”

The lifeline or laneline at this pool at a hotel in a National Park somewhat fulfills the need to mark the dropoff from shallow to deep water. But because there are not enough floats and they are not evenly spaced, it would not be strong enough to support a distressed swimmer, so it would not save a life as it is supposed to.

Here’s a job offer on craigslist:

The pool is located in a quiet rural area, and there are usually no more than 4 – 5 lap swimmers in the pool at a time. There is also a large pool office from which the pool can be monitored during bad weather. “