Treading water is the swim skill that allows people to be upright in deep water, keeping their head above the water. It involves arm / hand movements and a kick (leg movement).

This webpage is for my students to practice the kick at home, doing the same practice drill we do in class.

There are many “kicks” (leg movements) that can be used for treading water, including the scissors-type kick described at this webpage. (Warning, if you search for an online video about treading water you will find many that try to teach ineffective ways to tread. For example, the flutter kick, used with freestyle (the fastest stroke) and racing backstroke does not function well at all when people are in an upright position. I’d suggest my students not look at online videos, but just stick to doing this at home skill set.)

As we are learning treading water we will be in shallow, standing depth water and do just the arm motion, and just the leg motion, then try them together. People can expect to be able to tread for a few seconds at a time at first and as they get better at it, for minutes at a time.

Eventually you will want to be able to tread water using only your leg movement, but at first people do treading with both the arm and leg movements.

When people are swimming laps they sometimes stop for awhile and tread, just to talk to a friend they are swimming near.

Triathletes use treading when they need to stop swimming and sight on a turn or look towards shore. 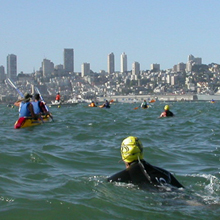 Swimmers use kick only treading when they want to stop swimming and adjust their swim cap / goggles, look around.

Water polo players use just the kick when they want their hands free to catch and throw the ball. 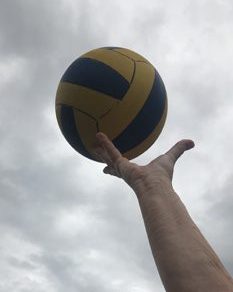 Lifeguards are expected to be able to tread water using just the kick (leg movement) for two minutes, or even longer. “Tread water for two minutes without support and without stopping, using only your legs. Your hands will be placed under your armpits. Your head must remain above the surface of the water.”

Lifeguards use the kick to be able to have hands free to place a victim on a backboard so they depend on having a strong treading water kick. 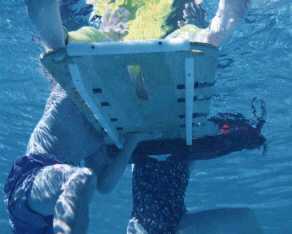 Here a lifeguard is treading while a swimmer at a Kid’s Triathlon uses the guard’s rescue tube for support.

Some people get good enough at treading water that they can reeeealy show off in the pool:

(For the photo above he was in 14 foot deep water. He had lots of experience treading water and juggling so this first try at doing both at once was relatively easy for him.)

Before you try this at-home practice, get set up with a folded towel under your hips for comfort (and if you are indoors, enough floor space to be able to have your feet and legs move about but not kick into a chair or table leg.)

You will go through five steps then repeat them. Move slowly through the steps at first – even slow-motion.

Step One: lying on your side, with legs straight, on top of each other and toes pointed. Your bottom leg will be flat on the pool deck (floor), with your other leg touching it.

(It is common to forget to keep your toes pointed through the entire set of steps. When we do this at the pool, the teaching assistants and I go among the students and remind them if they do not keep their toes pointed. My students have told me they had their roommates/ spouse or kids watch them and remind them. And the kids like trying this with parents.)

Step two: bend your legs (knees) up towards your torso. Only bend your knees as far as a right angle. Your knees will be in front of you and your feet behind you.

If you drew a line down your spine it would go through the center of your lower leg when your knees are bent to the fullest amount they should be bent. 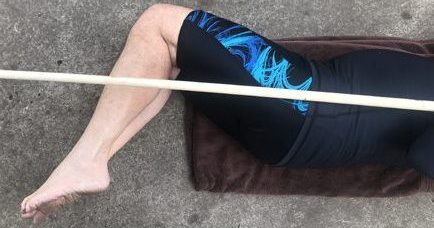 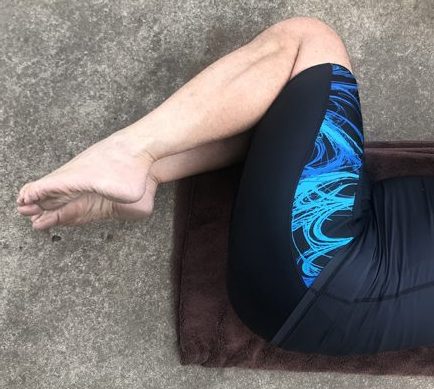 Below the knees are bent enough, at the right angle, but the legs are in the wrong position (again, your knees should be in front of you and your feet behind you): 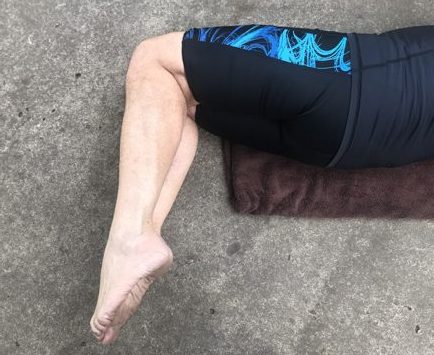 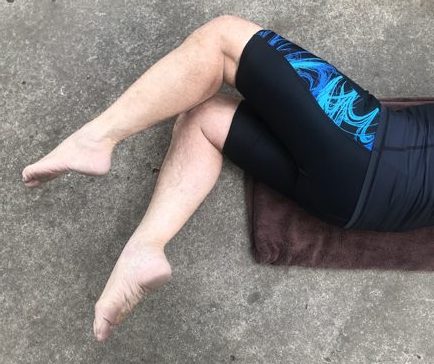 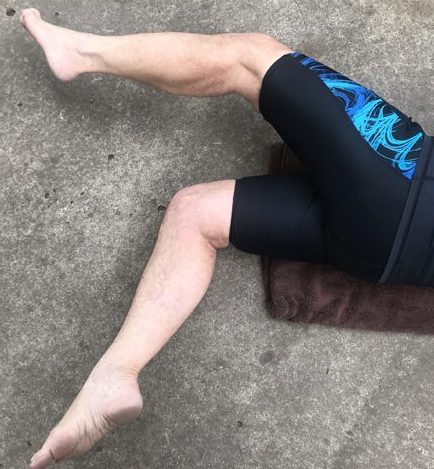 Step four: finish pulling your legs apart to put your legs in a wide “V, ” like an open pair of scissors. 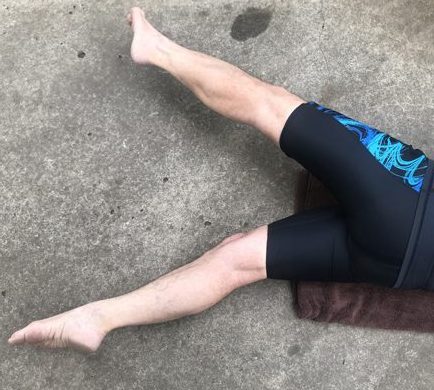 (Once you have decided which of your legs will go forward and which will go back, you should always practice this with the same leg forward and the same leg back. When you do it in the water you will be building muscular strength to be able to tread water longer and longer, so using the same legs the same way is more effective than switching back and forth.)

Step five, close your legs together, like a pair of scissors closing. This will be the power part of the kick when you do it in the water. This should put you back to the position for step one, again with legs straight, on top of each other and toes pointed.

When first trying this, many people go past the proper stopping point 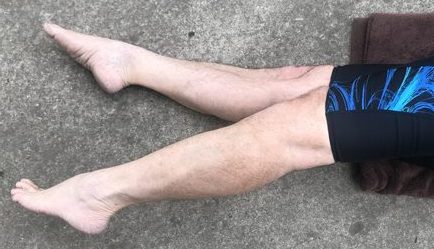 (try instead to end with the legs straight and together).

When we do this in the water we will make a minor change to step five, but for practice, to start to learn this, we do it the way described above.

Ideally you should repeat all the steps multiple times. It can be a bit of a workout, so doing some repeat sets one day, and more on another day might be better than overdoing it in one practice session.

Once you are used to being able to do it without thinking about each step, you can try closing your eyes (and having your roommate, spouse, kids see if you are still getting it right).

Our swim class works on parts of each swim skill, then puts them together. We will work on the kick (leg motion) for treading water or a swim stroke like freestyle, then work on parts of, and then all of, the pull (arm motion).

Once we have been practicing in the pool, when people have the kick and are adding the arm motion, they sometimes find themselves concentrating on the arms so much that their legs start doing a stair climbing motion or riding a bicycle motion.

One student got very frustrated and irritated at himself about this, even when I told him it is common and normal.

When I explained further, it helped him.

Your brain is used to doing many things without having to think about them (some people refer to this as muscle memory). Playing the piano or typing you don’t ‘think’ about each finger placement. If you are driving and need to stop your car you don’t have to consciously think, “I have to take my foot off this pedal, move it this far to the left and press on this pedal this amount.” You just do it, because your brain has done it so many times you don’t need to ‘think.’

When you concentrate on your swimming or treading arm movement, it is common and normal for your legs to do what they already know how to do, (like riding a bike or climbing stairs).

The young man who had been irritated at himself relaxed. As he got better at swimming his brain was able to do the many parts of each stroke coordinated properly together. Once near the end of the quarter his legs started riding a bicycle again, and he found himself laughing about it.

Here a drawing from a 1903 how to swim book on how to tread water. Before the scissors kick was invented, people moved their legs in a wide flutter kick, or actually tried to use a climbing stairs motion, neither of which work at all as well as a scissors kick. 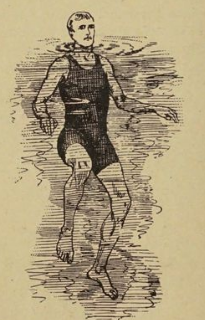