Below is a transcript of the Red Cross video of how to swim breaststroke, for my students to enhance their learning.

First, to be able to understand vocabulary about swim strokes, a transcript of the video section on stroke mechanics :

“Stroke mechanics are the basic elements of each stroke–body position, breathing and timing, arm stroke and kick. The focus of stroke mechanics is on making the most of propulsive movements while maintaining efficient body position and good body alignment. There are several terms you should understand before we begin studying individual strokes.

Body roll relates to the body position. It is the rotation of the body around the mid line–an imaginary line that runs down the center of a swimmer’s body. This rotation is important in the front and back crawl.

The power phase is the part of a stroke where the arm or leg moves the body in the right direction. The power phase of the arm stroke has three parts–the catch, the mid-pull and the finish.

No two swimmers perform a stroke exactly the same way. You may need to adjust part of a stroke because of individual differences in body type, strength or flexibility. Understanding the basic elements of each stroke is the key to becoming a better, more efficient swimmer.”

Next: the transcript of the Red Cross video of how to swim breaststroke.

The breaststroke is the oldest known swimming stroke used in competition. This stroke relies on symmetrical movements of the arms and legs to propel the body forward. The arm stroke and the kick alternate so as the arms reach full extension, the legs kick. The breaststroke also includes a glide phase.

From the glide position, begin the arm stroke. As your arms and hands pull back your head and upper body will lift naturally. Near the end of the mid pull, take a breath and start to bend your legs to prepare for the kick. Without pausing, start to recover your arms and drive forward with your upper body. As soon as your arms reach full extension and just before you lower your head into the water start the power phase of your kick by pressing backward with your feet. Your upper body and arms are in the glide position before your kick ends. Slowly exhale underwater and then begin your next stroke before you begin to lose forward momentum. Pull and breathe, kick and glide. Pull and breathe, kick and glide.

The arm stroke for the breaststroke is a sweeping and scooping circular motion. Sweep out, pull around; sweep out, pull around. The power phase of the arm stroke looks like this—catch, mid-pull and finish. The catch begins with your arms extended forward. Turn your palms outward at about a forty-five degree angle to the surface of the water. With your elbow slightly bent, press your palms out until your hands are spread wider than your shoulders, to about eleven and one o’clock. During the mid-pull bend your elbows and sweep your hands down and in. Keep your elbows near the surface as your hands pass under your elbows so that your forearms are almost vertical. During the finish, bend your elbows even more as you bring them to your sides. Sweep your hands in and up until they’re in front of your chest, angled slightly upward and almost touching. Speed up the movement of your hands from the start of the mid-pull to the end of the finish. Notice how the pitch of the palms changes throughout the power phase. During the mid-pull, the palms are pitched so they are always pushing water toward the feet, helping to propel you forward. Elbow position is also important for good forward motion. Throughout the power phase, your elbows stay close to the surface while your hands and forearms move deeper than your elbows after the catch.

The arm recovery is a continuous motion from the end of the power phase. After sweeping your hands together in front of your chest, your elbow should be inside the width of your shoulders. With your hands together, palms pitched slightly upward, begin to extend your arms so that your hands move forward. Continue to extend your arms while rotating your wrists until your palms are down. At the end of the recovery your arms are fully extended, palms down, and your body is in a streamlined position. Now watch the entire arm stroke sequence — catch, mid-pull, finish, recovery and glide.

When done correctly, the breaststroke kick generates more power than the arm stroke. Begin in the glide position with your legs straight and toes pointed. Recover your legs by bending your hips and knees. Draw your heels up toward your buttocks keeping them just under the surface. As you recover, separate your knees and heels until your knees are about hip-width part and your heels are outside your knees. When your arms are at the end of their recovery, flex your ankles and rotate your feet outward. From this position you are ready to begin the power phase of the kick. Keeping your feet flexed and using a continuous pushing action, forcefully press your feet and knees backward until your legs are extended and your feet and ankles touch. Extend your ankles and keep your legs straight while in the glide position. Now watch the kick again. To get the most forward motion from this kick, draw your knees no farther forward than your hips and increase the speed of your feet as you complete the pushing action. For the most effective kick, keep your feet flexed and accelerate the kick all the way to the very end. Now watch the breaststroke as a whole — body position, breathing and timing, arm stroke and kick.

Many students who enter my swim classes, and can already swim breaststroke, have the same common error. Instead of having the “Pull and breathe, kick and glide,” sequence, with their body straight, arms and legs fully extended during the glide:

they have no real glide. They do a kick, then a pull, a kick, then a pull and never take advantage of the glide portion. Competitive swimmers will not have a very long glide, but at least they are completely straight at one point in each sequence, instead of having either their arms/elbows or their legs/knees sticking out to the side all the time. The textbook notes that breaststroke “is a good stroke to use for survival swimming because by adding an extended glide between stroke, the swimmer can rest briefly.”

The Red Cross has notes (and some below are mine) about how most people progress as they learn breaststroke:

Body position: Trunk horizontal to 30 degrees from surface during glide

Arms: Hands may begin catch wider than shoulder width; arm bend at elbow increases as hand moves toward waist—hands may be level or slightly deeper than elbows; hands may sweep beyond the shoulder, but not beyond waist

Palms begin moving outward at or narrower than shoulder width— arms slightly bent; in the mid-pull, sweeps hands downward and inward; bend at elbow increases as hands move toward chest—hands deeper than elbows by end of pull; hands should not sweep beyond the upper chest area; sweeps hands back together so that hands travel along the midline underneath the body to a streamlined position

Arms sweep outward from the glide position (arms extended narrower than shoulder width); bend at elbows increases as hands move toward chest; elbows remain high throughout the pull; hands come together at the midline under the chin; arms extend forward to a glide position

No delay from finish into recovery; face and head submerge during arm recovery, kick and glide; exhales underwater

You can watch the video at the Red Cross swim teacher certification page. This video has more details than you can absorb in one viewing. My students who have seen it during classes multiple quarters in a row say they noticed something new each time.

To find the video go to
https://www.redcrosslearningcenter.org/s/candidate-water-safety

scroll down to the Videos section and click on Swimming and Diving Skills: Breaststroke
(it runs just under six minutes).

If you use Firefox as your browser, you might get an error message: “No video with supported format and MIME type found.”

If you would like to do some reading about swimming strokes, or swimming in general,
try the American Red Cross Swimming and Water Safety Manual.

Its public libraries number is 797.

This is the text for the Red Cross swimming teacher certification Water Safety Instructor.

It might be still downloadable for free. Go to
https://www.redcrosslearningcenter.org/s/candidate-water-safety
scroll down to Participant Materials and click on and open Swimming and Water Safety Manual. 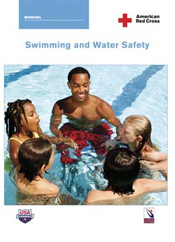 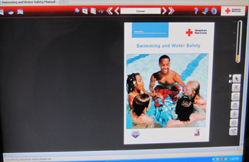 The Cooper 12 minute swim test, which we do in my higher level swim classes, is on page 192, where it says “The 12-minute swimming test, devised by Kenneth Cooper, M.D., is an easy, inexpensive way for men and women of all ages to test their aerobic capacity (oxygen consumption) and to chart their fitness program.”

How can I tell if I’m a good swimmer? has more tests

Or should we call that page, how can I tell if I’m a fast swimmer?