Studies repeatedly tell us that 90% of people who drown while boating were not wearing a life jacket.

Most of the time there were lifejackets available on the boat,

but when trouble happens it is too late to get them on. 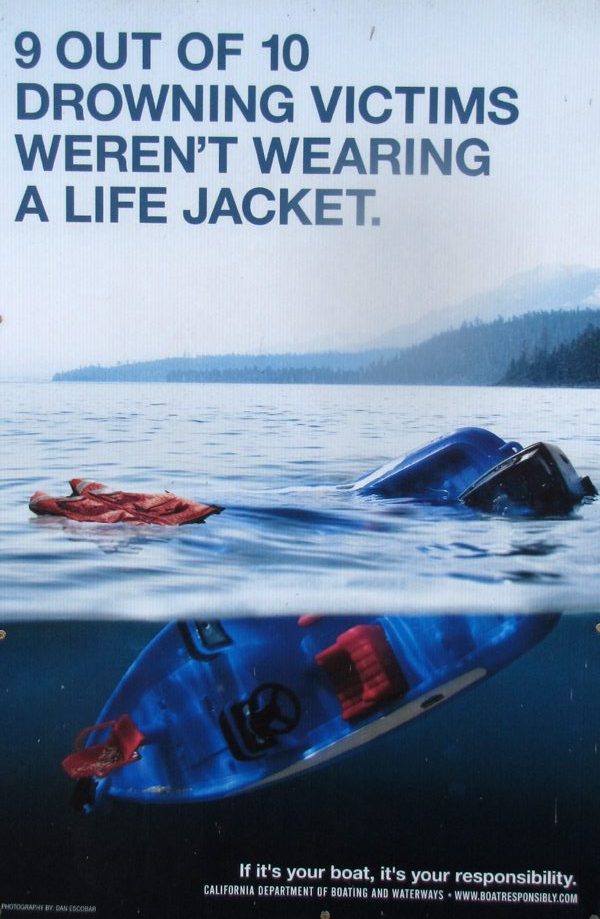 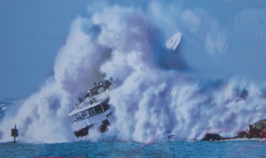 You can find lifejackets designed for swimmers and non-swimmers, for all types of water activities.
They are easy to put on and some models are designed to turn most unconscious wearers to a face-up position in the water.

Some have more bouyancy than others. The size of lifejacket you wear depends on your weight and size. Choose one that is U.S. Coast Guard approved. Wear it properly, including making it snug, not loose and fastening all zippers, snaps and/or ties. It should not ride up on your body.

The Coast Guard gives this advice:

If your lifejacket fits properly, it will help keep your head above the water. Too big, and the life jacket will ride up around your face. Too small, it will not be able to keep your body afloat. Life jackets designed for adults will not work for children!

Try It On For Size

#1 Check the manufacturer’s label to ensure that the life jacket is a proper fit for your size and weight.

#2 Make sure the jacket is properly fastened.

#3 Hold your arms straight up over your head.

#4 Ask a friend to grasp the tops of the arm openings and gently pull up.

#5 Make sure there is no excess room above the openings and that the jacket does not ride up over your chin or face.

For the best fit, try the life jacket in shallow water under safe and supervised conditions.

In National Parks you often need to show a lifejacket along with the boat when you get a required boating permit.
And you will need a boating permit for your stand-up paddle board.
The lifejacket will not get in the way of paddling a SUP: 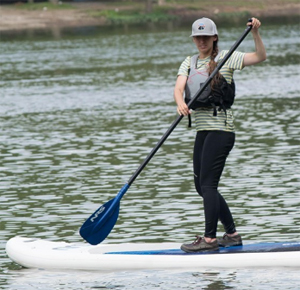 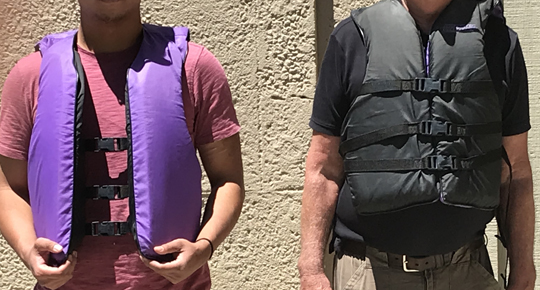 Yellowstone National park (where you must have lifejackets for everyone to get a boating permit)
has this slightly different advice about fitting a lifejacket:

“Check the fit of the Personal Flotation Device (PFD).

– Raise your arms over your head and have someone lift the PFD straight up from the shoulders. The PFD should stay in place. If the PFD comes off, or if the chest area of the PFD touches your nose, then the PFD is too big or loose and needs to be secured.

If you cannot secure straps or zip the PFD, then it is too small.

Also, test the PFD for buoyancy by making sure the PFD keeps your chin above water and you can breathe easily; if your mouth is not well above water get a new PFD with more buoyancy.” 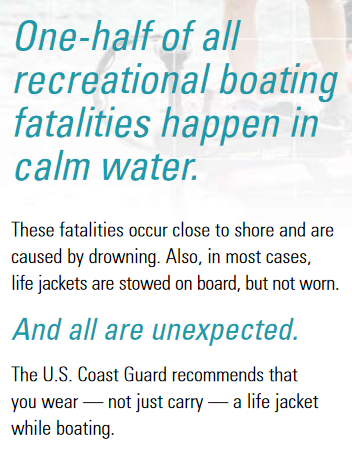 Don’t use your lifejacket as a kneeling pad in a canoe – wear it! 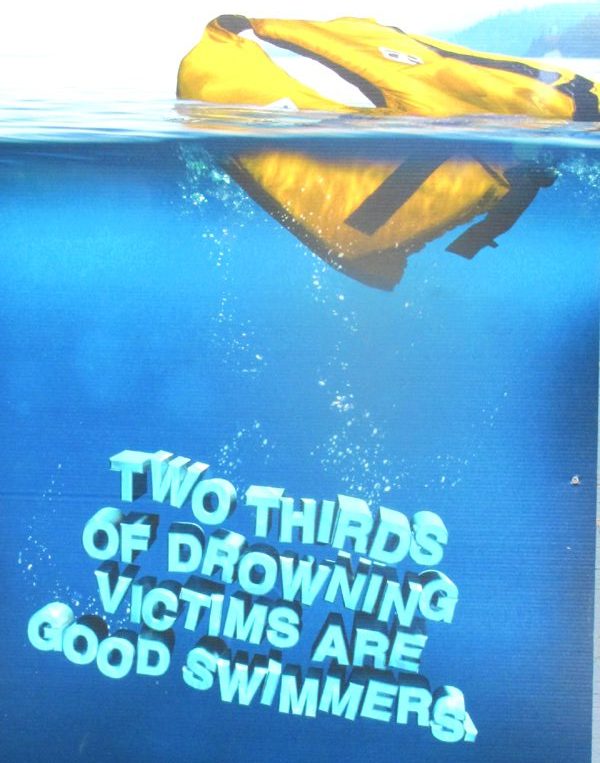 Alcohol was involved in about one third of drowning deaths.

Lifejackets are not just for boating. In the American Red Cross Water Safety Instructor’s Manual we read:

“Young children and anyone who cannot swim well should wear a lifejacket whenever they are in, on, or around the water.

Even in public pools or waterparks, people who cannot swim well should wear a life jacket. 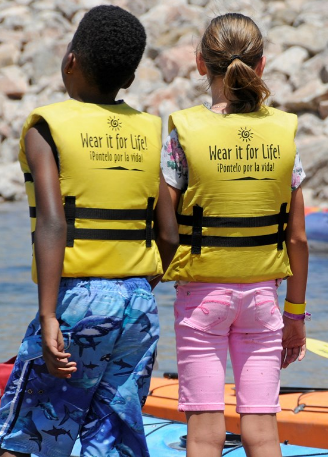 1.Draw your knees up to your chest.

2.Keep your face forward and out of the water.

3.Hold your upper arms at your sides, and hold your lower arms against or across your chest.

1. With two people, put your arms around each other so that your chests are together.

2. With three or more people, put your arms over each other’s shoulders so that the sides of your chests are together. Children or elderly persons should be placed in the middle of the huddle.

The 1-10-1 Principle
When immersed in cold water, a person has about…
• One (1) minute to gain control of breathing. The shock of immersion in cold water causes gasping for air and hyperventilation.
• Ten (10) minutes of meaningful movement to attempt self-rescue. The rapid loss of control over hands, arms, and legs leads to swimming failure.
• One (1) hour before becoming hypothermic and losing consciousness.

Without a personal flotation device (PFD), aka “life jacket”, one can only survive for about 10 minutes in cold water before being unable to save oneself. With a PDF, someone might survive for an hour before hypothermia sets in.

from the Yosemite Search and Rescue blog

True Confessions of a Rescuee

“The following incident was provided to us from a visitor who wished to share his near-tragedy in the hopes of others avoiding a similar experience. We appreciate the contributor’s candor but are especially grateful that he survived to tell his story. For anonymity, we will refer to the contributor as Rob.

The story begins when Rob receives an inflatable standup paddleboard as a gift. The salesperson recommends a leash (a coiled cord connecting the paddler’s ankle to the paddleboard to prevent separation if the paddler falls off the board). Rob, considering himself an intermediate-level paddleboarder on Southern California waters, disregards this advice.

On August 5, Rob vacations at Yosemite and launches his paddleboard on Tenaya Lake with his six-year-old son seated on the board. Rob’s son is wearing a child’s life jacket (PFD), which is required by law. Rob straps his own PFD to the board and does not wear it (as allowed by law). The beach is crowded with visitors.

Not uncommon for Yosemite, afternoon winds pick up and create wind chop on the lake. Rob decides to turn the board around and return to shore.

During the turn and with the wind now at Rob’s back, Rob falls from the board and separates from it. Rob tries to catch his board but the wind blows it away from him faster than he can swim to it. Rob realizes he cannot catch the board, which still has his son on it, as well as his own PFD. The water is cool. Moreover, Tenaya Lake is over 8,000 feet in elevation and while most people will not feel altitude illness at this elevation, anyone who isn’t acclimated will tire more quickly than at lower elevations.

In short, Rob is experiencing exhaustion and he is still about 200 feet from the shore. More to the point, Rob is beginning the drowning process. Out of options, he begins to yell for help and encourage his now-frightened son to do the same. Rob is starting to slip beneath the water.

Drowning is Rob’s probable outcome but three off-duty Yosemite emergency medical technicians (EMTs) and a triathlete are on the beach and respond to their calls for help. The triathlete reaches Rob first, followed by two of the EMTs with a floatation device, and they help Rob safely return to the beach. The third EMT assists Rob’s son back to shore.

This near tragedy ends safely but if Rob had been further from shore or the rescuers were not at the beach at that time, this might have ended differently.

One, in Rob’s words, always wear—do not just bring along—a PFD. Rob’s experience is very typical for small craft; things happen suddenly and if you are not properly wearing a PFD when it goes wrong, it is unlikely you will have time to find it and put it on. In short, skipping the simple step of wearing your PFD might cost you your life.
Two, Rob also points out the importance of wearing an ankle leash when operating a paddleboard. Weather can change quickly and if you fall off your board, you may not be able to catch it.”

A 2021 Coast Guard Report on boating accidents / deaths said that of the 489 boating deaths by drowning, 399 people were not wearing lifejackets

A 2018 report from the Canadian Red Cross said that:

The major risk group for snowmobile immersion deaths was 15- to 44-year-old males, with the largest number of deaths occurring among 25- to 34-year-olds.

Alcohol was present or suspected for 58% of fatalities 15 years of age and older (blood alcohol content was above the legal limit for 37%, below the limit for 12%, and suspected for 9%).

Only 3% of people who died in snowmobiling incidents were properly wearing a flotation device such as a lifejacket or survival suit.

Among deaths from immersion while on ice, 46% resulted from open holes in the ice, and 42% from falling through thin ice.”

A sculpture on a roof in Jackson, Wyoming of bears enjoying rafting: 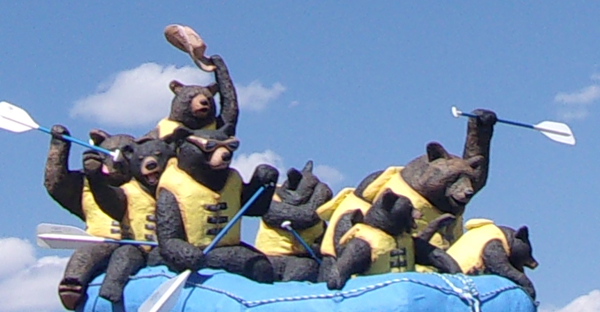 As the California Department of Waterways poster below says:

Wear a lifejacket and insist everyone on your boat wears one. 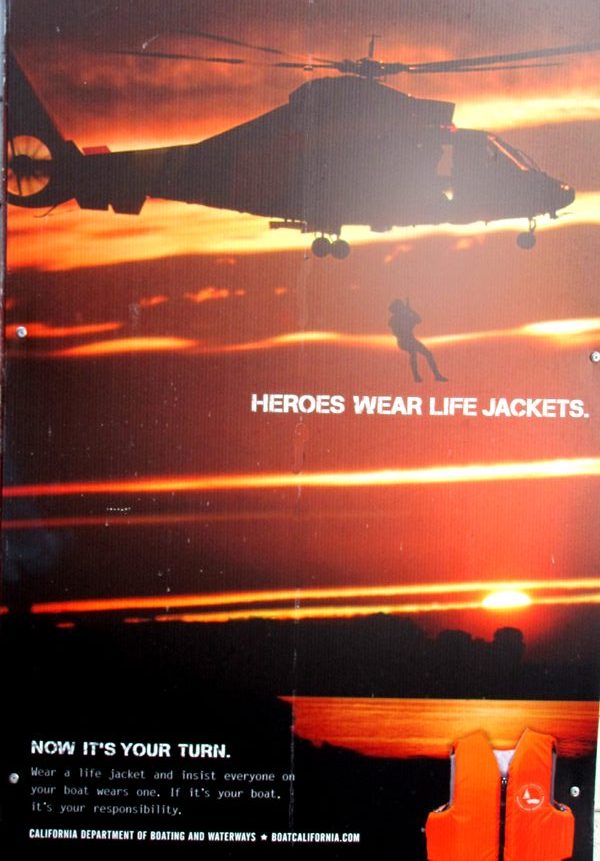 Moose, who are faster swimmers than humans

“. . . moose are incredible swimmers, at least as hoofed animals go. They are capable of hitting speeds of at least six miles per hour. That sounds like no more than a jogging speed for humans, but most humans can only swim two miles per hour.
High School swimmers hit three to four miles per hour.
Olympic swimmers win medals above five miles per hour.”

“Moose . . . have thick fur coats with long hollow hairs to insulate them down to temperatures of -60F. This also makes moose fur tremendously buoyant. All the air molecules trapped in moose fur do what air wants to do in water – rise to the surface. So the coat of a moose acts as a lifejacket, a constant force that tugs the moose to the surface.”