Match the percentages above to these:

the percentage of time a typical AED system, such as the ones installed in Chicago’s O’Hare Airport, is successful 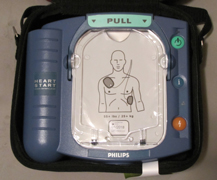 CPR alone is only successful 3 to 4% of the time. (A 1996 study by the New England Journal of Medicine showed that in television shows CPR was portrayed as successful 75% of the time.) CPR is crucial to keep enough oxygen to the brain until more advanced life support can get to the victim. That advanced life support is mainly an Automated External Defibrillator (AED).

A detailed explanation of how Automated External Defibrillators (AEDs) work is at: AED quick facts

In June, 1999, Chicago’s O’Hare Airport installed AEDs, located so that an AED was within one minute walking distance of anywhere in the airport. In the first ten months 14 cardiac arrests occurred and nine of the victims survived. That’s a 64% survival rate, compared to 3% – 4% with CPR alone.

At the New England Journal of Medicine website, read an article on the results of casino AED use:

AEDs aren’t just for adults. As of a 2004 study, over 300 children were dying yearly from preventable sudden cardiac arrest (SCA) while playing sports.

According to the Red Cross, in late 2006, “In Santa Clara County, for example, the average emergency response time from the call to 911 to arrival is about 7 minutes. (Times may vary due in part to traffic delays and the logistics of getting to victims in high-rise buildings.) “