Baby bears were among the animals watched on the 2018 Grand Teton trip.

We had gone out to the usual places we have seen bears before, and found signs the Rangers put up warning people to not get too close, keep their food safe, etc. 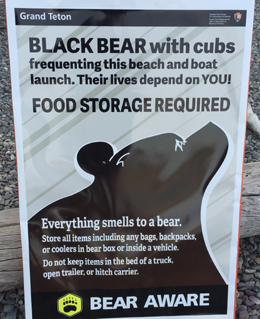 and at another location: 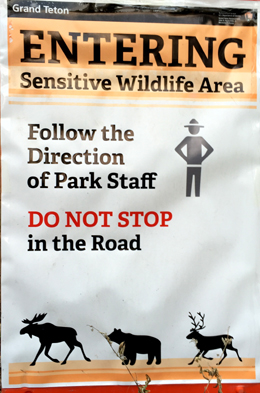 But it was not until our last morning that the bears came to us, very near the Colter Bay Village cabins. 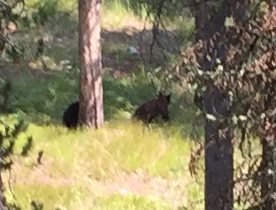 We got a chance to watch them for quite awhile.

The two cubs played and wrestled with each other. One climbed part way up a tree and when the other one tried to climb it slid down. Then they went to a second tree and both tried again. We were wondering where their mama was, as it is not good for people to get between a mama bear and her cubs, so watching from a good distance was in order.

(We were up a hill across a road from them.) 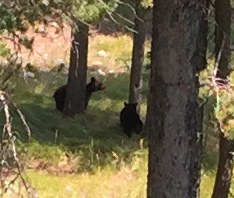 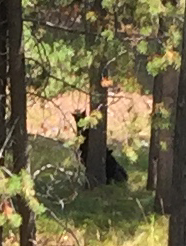 A park Ranger stayed near them in his vehicle. He spoke sharply on the vehicle public address system (loud) to a guy who drove up in a pickup truck and started to open his door

as the mama bear joined the two cubs and led them off.

Yes, we were so busy enjoying them that we only took a few pictures with the cell phone. We were worried we would miss some of the fun they were having if we looked around for the better camera / telephoto.

Next year you will get better pictures, okay?

On an earlier morning a scrawny coyote ran alongside the road past a pile of tree branches prepared for burning later in the season: 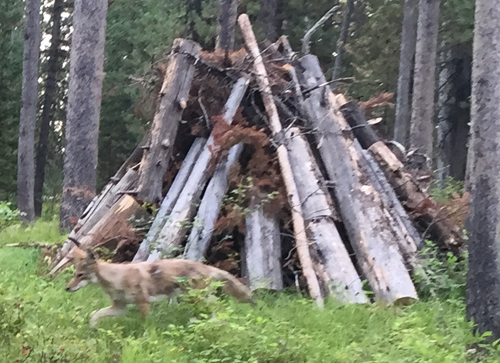 We were surprised to see a fox (with a beautiful long tail) in the middle of the day, running from the marina area towards the Colter Bay cabins/restaurants. It ran right by a picnic table where we were grilling salmon and marinated chicken, and I barely got the cell phone out in time to catch a photo of it on the far side of the parking lot:

A pair of deer near our cabin never did pose for a classic/perfect picture, 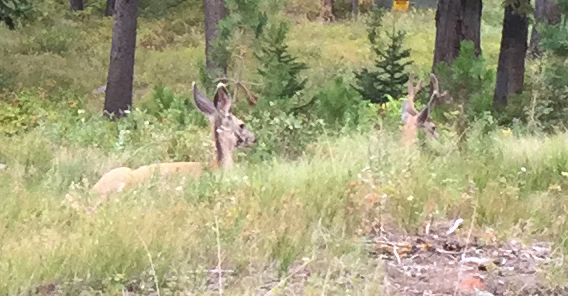 but we were able to point them out to new neighbors moving into their cabins next to us. (They wanted to know if they were deer or elk and I explained that elk are much larger, with much bigger antlers). I got the families set up for a group photo on their cell phone with the deer beyond them (just before the deer decided to wander off).

We did not get classic pictures of the bison, elk or pronghorns we watched, usually because they were in part blocked by trees, and/or we had pictures we liked from previous years and decided to not take any.

We did cause a small “animal jam” one morning as we watched a big male elk munching below the side of the road.

and we got stuck in a loooong line of cars, mostly not moving, in Yellowstone National Park for about 20 minutes when sooooo many people wanted to catch a glimpse of, or a long look at, a female elk in the river. 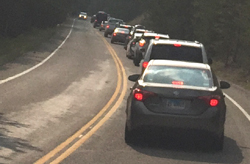 Each morning we were out early we heard Sandhill Cranes, but did not see them dancing this year.

Many sunrises included dark clouds and a bit of mist from them: 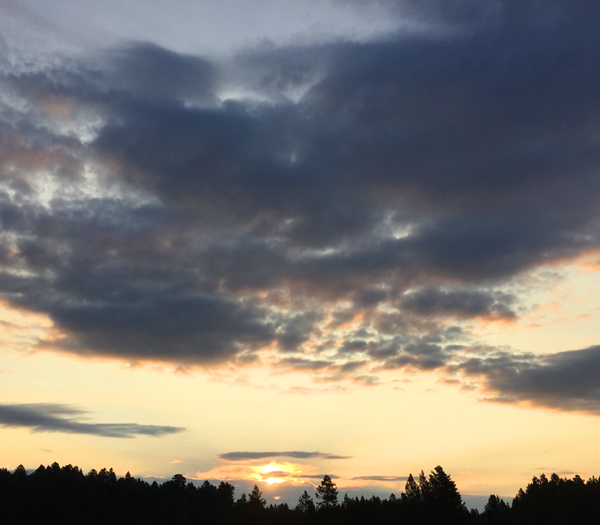 As usual, the eggs Benedict with a bit of floral decorations at Jenny Lake lodge were picture perfect, (with or without the crab cakes):

But in 2019 they did not offer crab cakes eggs Benedict, or the Monte Cristo, and offered many fewer choices in the omelet, so we ate elsewhere. For future trips we will check out the menus again before we go to decide where our big group breakfast will be.