At this page, in this order:

adult who just caught a fish: 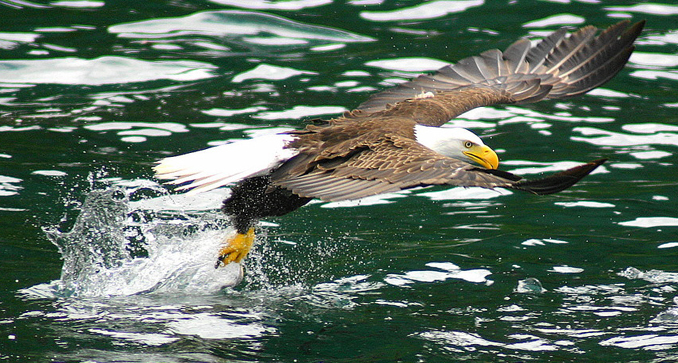 Hear a Bald Eagle (webpage labeled as a Golden Eagle, but when I linked to it, had Bald Eagle sounds. 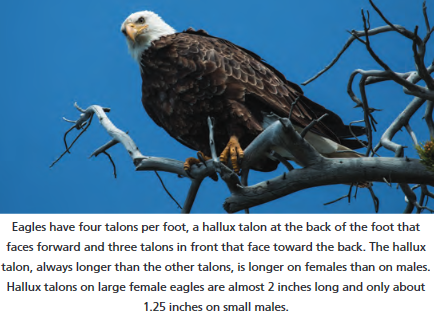 More photos of Bald Eagles on our college trips are here. 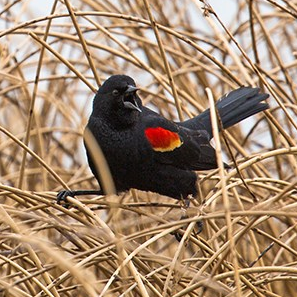 “Most common bird on the North American continent. Male red-wings are polygynous and may have up to three mates each summer. Males defend territories of up to 1/4 acre by displaying their red patches to other males and by calling. Females are brown above with heavily streaked breasts.”

Canada Geese , 25 inches long, who mate for life, are often seen in flocks. 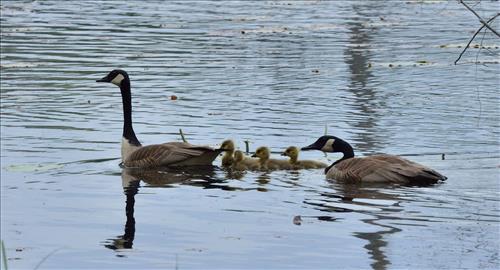 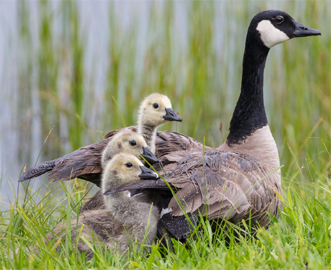 Clark’s Nutcracker (Nucifraga-columbiana): “Both males and females tend a high-elevation nest. They gather large conifer seeds from whitebark and limber pines and cache them for later.” 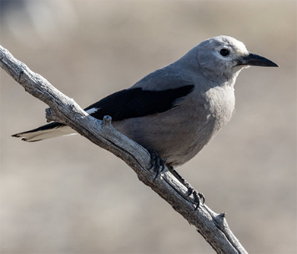 Golden Eagles hunt farther away from water and nest along cliffs. 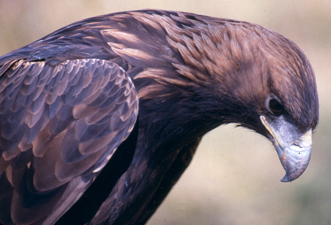 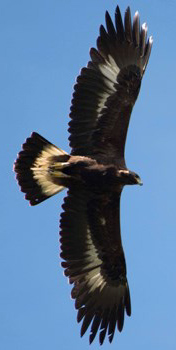 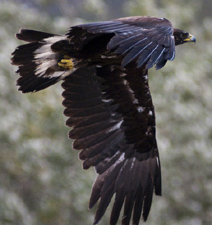 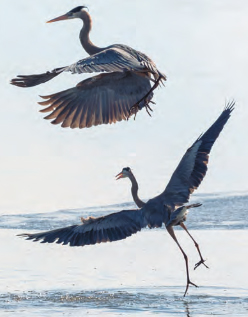 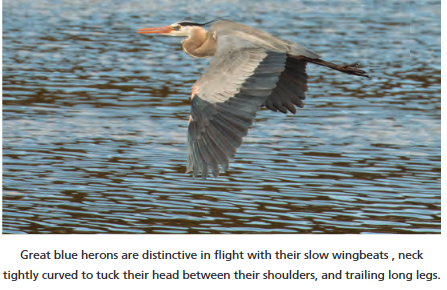 Great Gray Owls are “the tallest owl in North America with the largest wingspan. Males hunt during daylight making them visible in the lodgepole forest.” 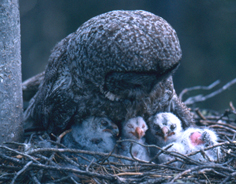 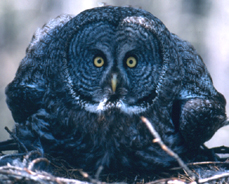 Harlequin ducks are very strong swimmers, even in whitewater. 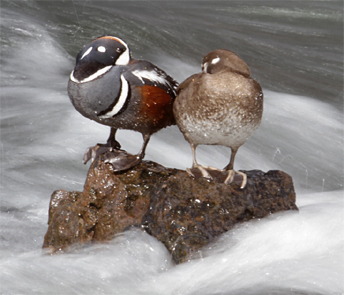 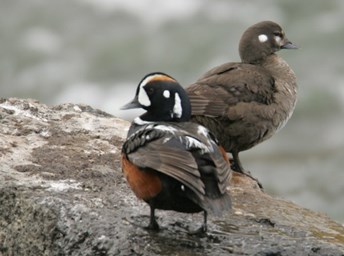 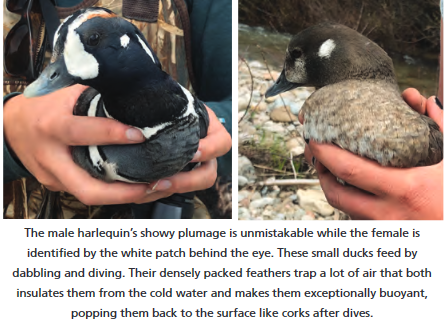 Common Loons sometimes nest on back-county lakes we have stayed overnight at. (Loons are unable to walk on land.) 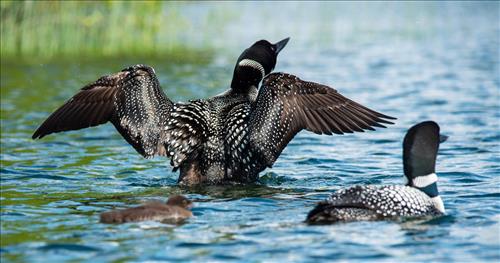 These pictures are from a video we shot of Magpies darting in and out trying to get bits of a fish, or even get the Bald Eagle eating the fish to fly off and leave the fish behind:

Magpie sounds can be heard here.

We regularly see Mergansers with chicks swimming behind mom in a row and diving on all the lakes and the Snake River. Northern Flicker calls and rattle calls can be heard here and here. 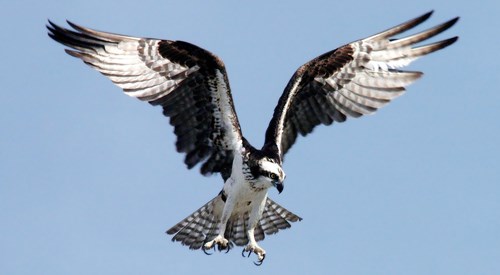 When you get used to the huge size of nests of Osprey, often built on top of a dead tree (and Bald Eagles) you will spot them better. 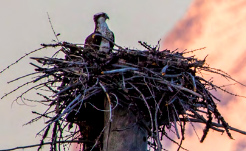 Water Ouzels (also known as American Dippers) live and play in the water. We have regularly seen them in Cascade Canyon, especially where the trail gets fairly close to the water farther up the trail, higher up in the canyon. Naturalist John Muir said the ouzel was his favorite bird, and wrote: ” . . . “the little ouzel is flitting from rock to rock along the rapid swirling Canon Creek, diving for breakfast in icy pool . . . not web-footed, yet he dives fearlessly into foaming rapids, seeming to take the greater delight the more boisterous the stream . . .” Muir wrote an entire chapter about ouzels, (chapter XIII) in The Mountains of California, which you can read at:http://www.gutenberg.org/ebooks/10012

Ouzels build their nests in the spray of water.

Ouzel sounds can be heard here.

Besides swans, other huge white birds are pelicans , (not the same as the Brown Pelicans we see along the Pacific coast), if they have a huge yellow beak and throat pouch.

There can be closures from May to August at Baxter’s Pinnacle and Descent Gully near the mouth of Cascade Canyon to protect an active Peregrine Falcon nest.

Ptarmigan do not migrate when winter comes, but change the color of their plumage each season to blend in with their surroundings. Ravens want to get into your gear, and some have figured out how to get into day packs or . . . a bag tied onto a motorcycle: 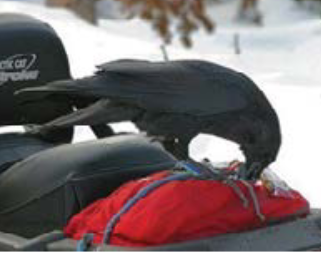 Raven sounds can be heard here and here.

Getting to experience Sandhill Cranes singing is a favorite part of our trips, especially when we are lucky enough to see pairs dancing.

Yellowstone park notes they are the “tallest birds in Yellowstone, they stand about 4 feet (1.2 m) high. They have a wingspan of approximately 6.5 feet (2 m) and are often mistaken for standing humans or other animals at a distance.” Sandhill Crane songs can be heard here and here.

Steller’s Jays have a mid-to-deep blue coloring with charcoal black shoulders and a crest at the back of their head. 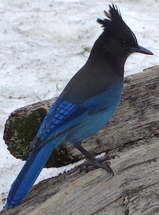 Read about the structural color (as opposed to pigmented color) of Jay feathers.

Kenai Fjords National Park notes: “The wings of jays are short and rounded, allowing them more maneuverability through dense trees, and a long, rounded tail acts like a rudder to improve maneuverability as well. Their flight pattern is often a few flaps followed by a glide as they lose altitude. Jays must beat their wings repeatedly to climb back up again. . . Steller’s jays might be considered the alarm system for surrounding communities. Their call is a cheeky, repetitive “shack, shack, shack” and is often recognized as a warning call by other birds and mammals in the area. As with many of the Corvidae family, jays are excellent mimics. Scientists have studied jays repeating the call of the red-tailed hawk to scare away predators.”

Steller’s Jays want to get at your food: How to draw a Steller’s Jay:
https://www.nps.gov/yose/planyourvisit/upload/howtodrawaSTELLERSJAY.pdf

Trumpeter Swan: can be found (according to the park) at: “Oxbow Bend, Swan Lake and Flat Creek in the National Elk Refuge.” We have also seen them at Christian Pond. “The largest waterfowl in North America is making a comeback after near extinction in the early 1900s.” Western Meadowlark: feeds (on seeds and insects) and nests on the ground (most concealed with roof woven from grass) in / around meadows and marsh edges. Western Tanager “These colorful birds winter in southern Central America and nests in the lodgepole forests. The redder the male’s feathers, the more fit he is.”

many of the above are the birds we see most frequently on our Outdoor Club trips to Grand Teton National Park. We most often see them when we are out kayaking, especially on Oxbow Bend.

The club brings a few pairs of waterproof binoculars, but not enough for each person in a large group.

and a telephoto lens / tripod for your camera.

• Nesting birds are easily disturbed. If an adult on a nest flies off at your approach or circles you and screams an alarm, you are too close. Unattended nestlings quickly succumb to predation or exposure to the elements.

• Do not feed birds or any wildlife.

• Do not play bird songs or use bird calls. Such sounds disturb territorial males and nesting pairs.

• Good birding areas often attract other wildlife. Maintain a distance of at least 100 yards from wolves and bears and 25 yards from other animals. Do not position yourself between a female and her offspring.

Download photos of over a hundred birds of Grand Teton National Park
https://www.audubon.org/climate/national-parks/grand-teton-national-park

Download this instead of buying it at a visitor center, (well worth looking at for info about animals and much more): https://www.nps.gov/yell/learn/resources-and-issues.htm

We always recommend reading about the brains and abilities of corvids (Crows, Ravens, Magpies and Jays)
Gifts of the Crow How Perception, Emoton, and Thought Allow Smart Birds to Behave Like Humans.

The park service offered this list of birds of Grand Teton National park:

Don’t bike or jog/run by yourself, it is safer to bike in groups since there are very large, potentially dangerous and unpredictable animals potentially everywhere.
Data suggest that rates of sudden encounters with bears are much higher among cyclists than hikers.
Grand Tetons biking includes statistics about cyclist encounters with grizzly bears.

Your safety in grizzly bear territory tells you what to do if you see a bear in the distance or a bear charges you and has info about Bear Pepper Sprays and what might happen before a bison charges.

During a thunderstorm, don’t take a shower or use a sink, including washing dishes. Don’t talk on a land line phone. Don’t use your I pod. Don’t get zapped! Please read Thunderstorm and lightning safety

Details about our next club trip to Grand Teton National Park start at Grand Tetons.