Many National Parks have lower speed limits than people are used to on a road of the same width, number and degree of curves, number of lanes, etc. There are few streetlights.

Some people do not realize that the Park Rangers they most commonly meet, a Ranger naturalist they meet on a Ranger led walk, or at a Visitor Center, are not the only kind of Rangers there are.

Some Rangers have full legal ability to issue REAL traffic tickets (as a sheriff, police officer, constable or gendarme would do where you live),

or even arrest park visitors and take them to jail.

“LEs” (Law Enforcement Rangers) can sometimes choose to give you a verbal warning or “educate” you about a park law you break, but have some things they MUST give you a citation for.

For example, let’s say you do not know that drones are illegal in National Parks. If you fly one near or over a bison herd in Grand Teton Park, your attempt at a very convincing argument that you were not really trying to fly over the herd to make it stampede, but were just innocently getting pictures for your son’s school class to see when you get back home will not be accepted. It is a mandatory citation. AND the first court date available could be in October for what you did in August. Likewise, if you use that drone anywhere near the Jackson Hole airport (which is within the boundaries of Grand Teton National Park) you will also get at least a mandatory citation.

Please also note that if you fly a drone near a wildfire, the helicopters needed to fight the fire can’t fly, and your photography can put human lives and property in danger.

Some parks have specific speeds that if you exceed them, or if the amount of alcohol you consumed is too high by law, a citation is mandatory.

A Law Enforcement Ranger may have discretion to decide, based on what you did, to give you a traffic ticket, a warning or just educate you. Were you not only going too fast, but also passing over a double yellow center line, passing multiple vehicles at a time, tailgating, or swerving in and out of traffic? Is your “child not restrained” examples: a child sitting in the driver’s or any passenger’s lap, kneeling on a seat, climbing from front seats to the back, sticking their head out a window or a skylight? Is there a record in the park of your being cited previously? 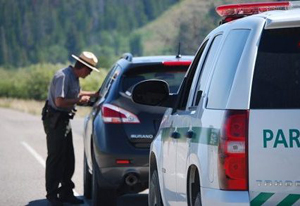 – – Lower speed limits can help you move in time when a foreign national accidentally drives on the left side of the road, as they are used to at home, see below:

Next to drowning, motor vehicle crashes are the second leading cause of accidental
deaths in the National Park Service. One study found that

“visitors distracted by scenery was a contributing factor in 27% of all motor vehicle crashes,

alcohol was a contributing factor in 23% of the crashes,

visitors from Asia and Europe crossing over the centerline to drive on the left side of the road was a factor in 14% of the crashes,

excessive speed was the primary factor in 8% of the crashes,

and visitors driving off-road and hitting stationary objects or rolling over was the primary factor in 11% of crash fatalities.

Defensive driving can include

– – Keeping an extra-long following distance from the car in front of you can help you keep out of a multiple vehicle collision, perhaps more common in a park, when people (hmmm, you?) are watching the scenery rather than keeping their eyes on the road / traffic.

– – Pulling over at the first safe opportunity when you were doing the speed limit and a driver who came up on you quickly and is now tailgating or even close to it. Let them pass you and you can miss out on having your vacation ruined by being hit from the rear.

The lower speed limits are often in place to protect wildlife. A maximum speed limit might be 35 mph everywhere in one park, and in another with a major highway going through it, there might be a speed limit of 55 during the day and 45 at night on that highway.

You will not be able to stop in time to not hit an animal that darts across the road, especially at night when people “overdrive their high beams – when stopping distance is greater than the headlight illumination distance.”

“Motorists are reminded to drive the posted speed limit and to be prepared to stop suddenly for wildlife along or on park roadways. Driving slower than indicated speed limits, especially at night, can increase the margin of safety for people and wildlife. Collisions between motor vehicles and wildlife may result in severe damage to a vehicle, serious or fatal injuries to the wildlife.” 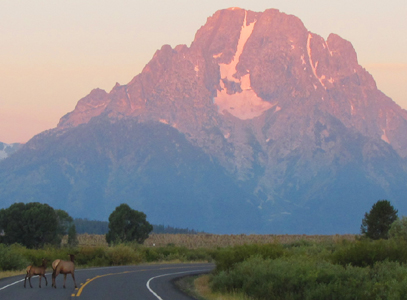 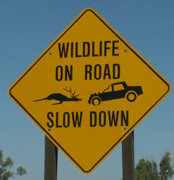 Photo of griz and cubs crossing a road in Grand Teton park courtesy of NPS:

Hundreds of the animals that make our National Parks so special are killed each year, mostly by people not obeying speed limits. And in the process, you can not only get a traffic citation, you can do serious damage to your vehicle, whether you actually hit an animal, or just try to swerve away from it.

Damage to a Chevy that collided with a bison:

Down on the right, a wrecked red pickup: 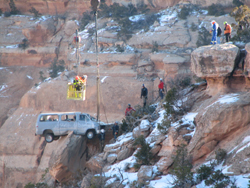 Trying to say that you have never been in this park will not work, anymore than telling an officer that you thought the highway number sign (280, 140, 101, 89) was actually a speed limit sign. You can read the most important rules/ laws you should be following in the park newspaper you can get a copy of as you enter the park, or in advance of your vacation, as most parks post it at webpages. You can also search for the Superintendent’s Compendium at each park website to read. Yosemite National Park regulations, policies and rules links is an index to Yosemite National Park websites on most subjects that have regulations affecting people’s use of the park.

Many of the park websites / compendiums have the reasons behind the rules.

How much will I have to pay for my ticket?

Will I have to go to court?

For some, a mandatory appearance in court may be required at the discretion of the citing officer and if the person does not appear, a judge “may issue a warrant of arrest for that person.”

For other citations / tickets issued in National Parks, people can pay without coming to court.

While camping, creating unreasonable noise between hours of 10:00 PM and 6:00 AM: $150 or mandatory appearance in court

Operating a motor vehicle in a manner which unnecessarily causes its tires to squeal, skid or break free of the road surface: $150

From the Yosemite webpage: “Failure to store your food properly may result in impoundment of your food or car and/or a fine of up to $5,000 and/or revocation of your camping permit.”

It can take you three times the normal distance to stop when a road is icy (even with anti-lock brakes, four wheel drive and snow tires). Spin-outs are common in the winter in parks that are open. Leave a good following distance. Slow down well in advance of stop signs.

Expect people coming from another direction to not be able to stop and to slide into the intersection (and possibly into you).

In Yosemite, in late May some years, Highway 140 between Crane Creek and the Yosemite National Park border (Parkline) in El Portal becomes “thick with thousands of California tortoiseshell butterflies. This species emerges in spectacular numbers in some years and is thought to be the source of Mariposa County’s name, which is Spanish for butterfly.
Please help minimize the number of butterflies killed by reducing your speed when you encounter their swarms. At 25 mph, the butterflies are more likely to follow the slipstream around your car, and emerge unscathed. At higher speeds the butterflies don’t fare as well. Dead butterflies along the roadway also increase the risk to the birds that come to feast on the dead butterflies.”

How to not collide with a deer,

Safe driving in rain and fog,

Parking and traffic jams in Yosemite valley tips and tricks

Prepare for winter driving has a link to bad weather driving tips, tips for using tire chains, tricks for dealing with frozen car locks, how to prepare your vehicle for winter driving, how to de-fog the windows, a winter survival kit for your car and what to do if you get stranded

fatal, near fatal or close call incidents/accidents in camping, backpacking, climbing and mountaineering is a collection of some of the true stories I use in my wilderness first aid class to illustrate how the wilderness is not dangerous, it’s the people who aren’t prepared, who don’t know what they are doing, or who take inordinate risks, that are the danger.

Thunderstorm and lightning safety includes a warning about not using your cell phone or IPod during a storm.

your safety in grizzly bear territory tells you what to do if you see a grizzly in the distance or if a bear charges you and has info about Bear Pepper Sprays.

Before a bison charges

This warning from Canada can apply to any long-distant drive: “Visitors to large cities and popular tourist destinations should be aware that parked cars are regularly targeted for opportunistic smash-and-grab thefts, and they are cautioned to avoid leaving any unattended possessions in a vehicle, even in the trunk. Due to the high incidence of such crimes, motorists in Montreal, Toronto, Vancouver and some other jurisdictions can be fined for leaving their car doors unlocked or for leaving valuables in view. Visitors should exercise precaution to safeguard their property.” 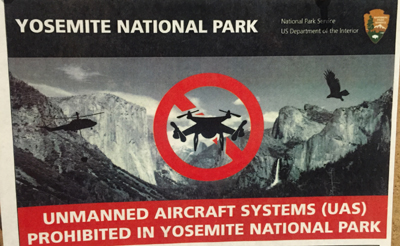 Reasons why you can’t play with / photograph with your drone are at: https://www.nps.gov/yose/learn/news/use-of-unmanned-aircraft-systems-drones-prohibited-in-yosemite-national-park.htm

Yosemite driving regulations from 1913 are at:

“Time and speed restrictions: Automobiles are restricted to an approximate speed of 10 miles per hour on rolling mountain country . . .”

“Cars may leave Yosemite Station going out of the valley between the hours of 6 and 7.30 a. m. every morning, but at no other time during the day.”

“Every person presenting a car for admission to the park will be required to satisfy the guard issuing the ticket of passage that the brakes of his automobile are in first-class working order and for this purpose all automobilists will be required to effectually block and skid the rear wheels of their automobiles with either the foot or hand brakes or such other brakes as may be a part of the equipment of the machine.”

“All motor cycles are forbidden to enter the park.”