You should not substitute the use of a GPS receiver for a map and map reading skills.

Gadgets stop working, but your map reading skills will stay with you.

GPS does not function everywhere.

Depending on a GPS unit to intentionally be separated from your hiking partners can lead to confusion or even disaster. Be certain that the people you are with are happy with this prospect.

Denali National Park warns: “technology has a tendency to fail us just when we need it most … cold, wet, harsh environments … can wreak havoc on fragile equipment. Batteries die, the cold cuts circuit boards, plastic housings break, etc. Your best contingency plan will always be self-sufficiency. Even when communication devices do work, rescue help cannot always reach you in a timely manner.”

from the National Park Service Morning Report of Monday, June 9, 2008

Park dispatch received a call routed through 911 from Kane County dispatch on May 31st regarding people stranded in the backcountry and needing medical attention. A Pennsylvania couple in their 60s had rented a two-wheel drive sedan and were vacationing in the Glen Canyon area. They planned to drive from Big Water to Escalante, both small towns in southern Utah, via a rugged four-wheel drive road. They later reported that the GPS unit in their vehicle advised that they could travel this route. About 45 miles from Big Water, though, the vehicle broke down after the oil pan was ripped out and the engine seized. The couple had several bottles of water and soda with them, but no food nor other means of survival. After being stranded for four days with daytime temperatures in the high 80s, they were able to flag down a visitor on a dirt bike who called 911 on his cell phone. Classic Lifeguard launched two helicopters from Page to fly the couple out. They were extremely dehydrated and were kept at the hospital overnight for observation. The couple never stopped at any of the various visitor centers to ask for information, nor did they did turn back when they came upon signs on this backcountry road which said that the road was impassable. If they hadn’t encountered the person on the dirt bike, it’s likely that they would have perished. Rangers are increasingly dealing with visitors who rely on navigation systems which may provide misleading information, often with tragic results. While navigation systems such as GPS units can be fine tools, nothing can replace up-to-date information from informed personnel as well as using common sense when out in remote areas. [Submitted by Eric Scott, Acting District Ranger]

From the National Park Service Morning Report of Tuesday, June 06, 2006

On May 31st, three men set out to traverse Behunin Canyon, a venture that requires eight rappels of up to 150 feet. They used a GPS unit as their primary means for locating the head of the canyon. The canyon that they found and entered, though, was Heaps Canyon. The heads of the two canyons are separated by a quarter mile, and the differences between the two routes would have been apparent if the men had used a map or a detailed route description.

The Heaps Canyon route is a multi-day trip that includes swims through numerous potholes with water temperatures in the 40s and many rappels, including one of 300 feet. The men discussed discontinuing their trip when they failed to find anchors at the first cliff band, but they instead created an anchor and forged ahead. Once they realized their mistake, they were unable to return to the canyon rim. On the morning of June 1st, one of the men decided that he’d had enough of swimming through the frigid pools and climbed to a nearby knoll to await rescue. The other two continued into the narrowest section of the canyon. The three men were reported overdue on the evening of May 31st. A ranger patrol began a hasty search of Behunin Canyon the next morning, but determined by that afternoon that the men were not in that canyon. A helicopter search was then begun. All three men were located and equipment, clothes and radios were lowered to them. On the morning of June 2nd, additional equipment was lowered to the pair in the canyon, and they were able to complete the passage under their own power. The third man was flown out in the helicopter. Rangers are surprised that the two men who continued on down the canyon did not succumb to hypothermia. Thick wetsuits or drysuits are typically used to traverse the route. [Submitted by Ray O’Neil, Plateau District Ranger]

cost of Staying Found, by June Fleming or Be an Expert with Map and Compass, by Bjorn Kjellstrom: free at the library.

GORP and hiking snacks includes no-cook meals. Consider this if you want to go to the top of a peak. You might not want to bring a stove at all. If you spill some boiling water on your hand, for example, you won’t have enough cold water to pour over the burn to stop the burning and ease the pain. You can get by just fine (or even be somewhat gourmet) with cold food.

Thunderstorm and lightning safety includes the answer to the question: Why can’t you swim during a lightning storm? A strike on a lake doesn’t kill all the fish in the lake.

Safe distances from wildlife includes reasons to stay away from even friendly seeming animals in parks and charts and photos to better be able to determine and visualize how far away from wildlife you need to stay to be safe (and obey laws that do have penalties). 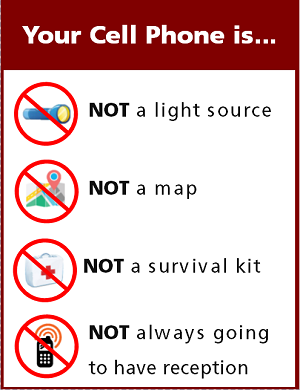 Find a compass, altitude, latitude and longitude on your cell phone 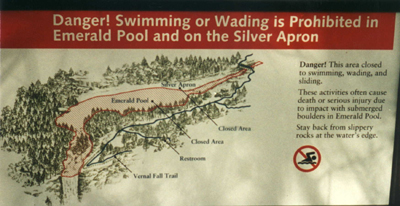 Enhance your drive to your next adventure: Road trip advice and etiquette

Camping solutions for women has tips for and answers typical questions from first-time women campers, including the question: Can menstruating women camp or backpack around bears?

Before a bison charges