This is additional info on Yellowstone National Park for our Outdoor Club Grand Tetons trip. For our event, any side trip you take to Yellowstone will not be an official club event and the college owned kayaks can’t be used there unless the advisor is along.

Below, on the left, a National Park Service aerial view of Yellowstone Park

to the right, in the NASA photo from space the biggest lake in the upper half is Yellowstone Lake, and the long one further south is Jackson Lake, with the Teton range showing as a white snow covered strip to the left of it. 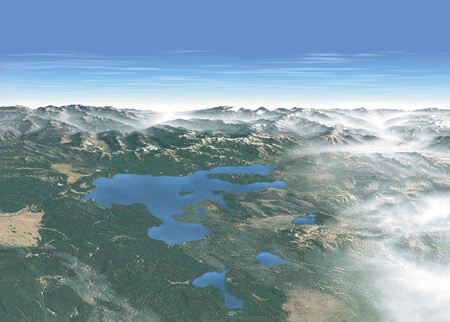 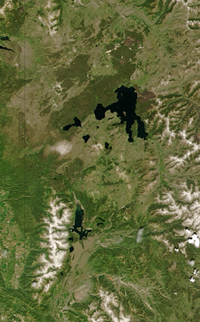 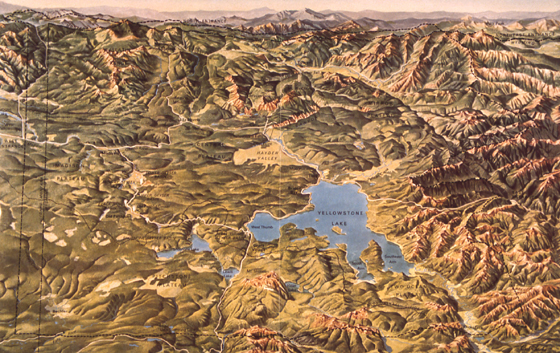 and in this NPS panorama, the Teton range, with Jackson Lake showing just below it, is at the top: 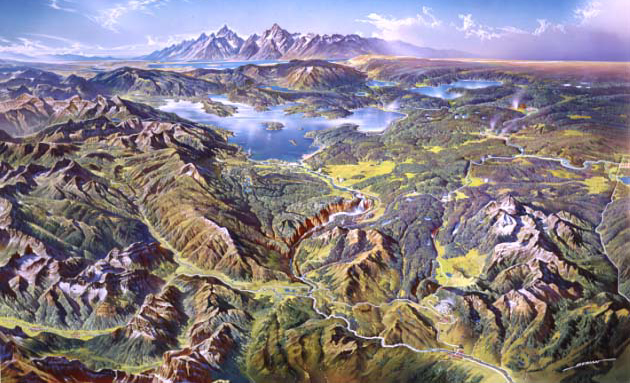 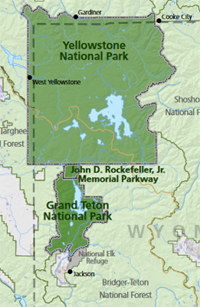 Expect traffic jams at entrance stations and along the road when bison decide it is time to cross the road:

and traffic jams when people try to park just off the roadway (often illegally) and can’t get their vehicle far enough off the road, but take of to sightsee, get a photo, making it difficult for others to get by: 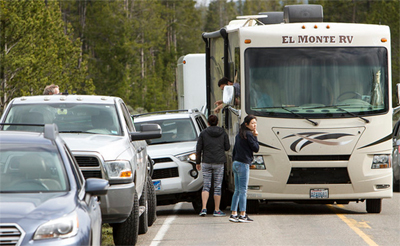 Expect people who ignore No Parking signs, making it difficult for people who park legally to back out of their parking space.

Another reason to only park in wide-enough paved turnouts along the road
is that if you park a vehicle in tall dry grass,
hot tailpipes can cause fine fuels to catch on fire.

Yellowstone has a page about parking, including busy times (you guessed it, often noonish to 4 p.m.)
https://www.nps.gov/yell/planyourvisit/parking.htm 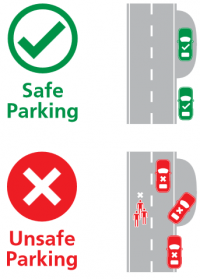 Lots of travel companies that say you can see wolves while there. Sightings are actually rare and from quite a distance.

And see the 2018 Yellowstone Bird Report. Many of the same birds are in Grand Teton National park. See pictures and links to bird calls.

A photo competition with some great pictures: https://www.yellowstone.org/photo-contest-2016-winners/

See what people were doing before a bison charged them. 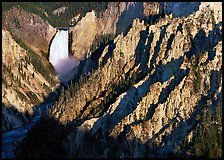 We really recommend that people who are planning a long trip take the time for the hike to the top of Mount Washburn near Dunraven Pass in Yellowstone. When we last did this hike they had warnings that there is no water along the trail or at the fire lookout at the top. Others on the trail did not take this warning seriously and were quite dehydrated by only half way through. From the top you can see (far off) Old Faithful and other geysers erupting. 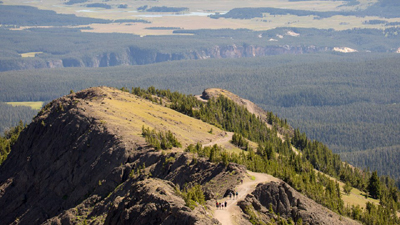 Here, a view of Mount Washburn from the Hellroaring Creek trail in the Absaroka Beartooth Wilderness: 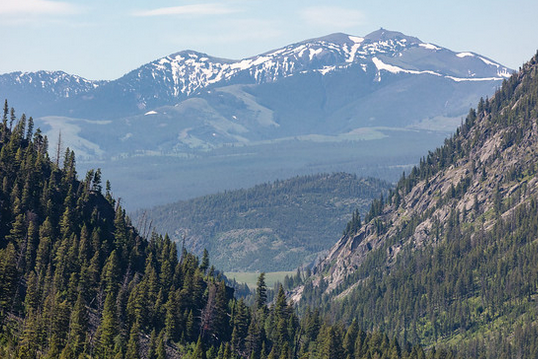 Planning a visit to Yellowstone is at:
http://www.nps.gov/yell/planyourvisit/index.htm

with links to maps, and a complete park trip planner. At the maps section you can click on individual section maps, many of which have online tours.

Bison sometimes wander through some of the Yellowstone National Park campgrounds (notice the size of these two bison in comparison to the tents): 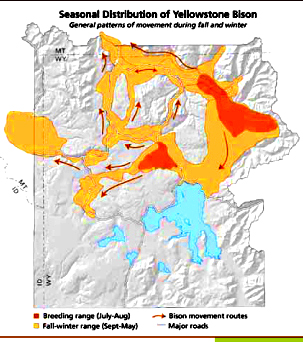 There can be bear management areas closed or restricted to travel http://www.nps.gov/yell/parkmgmt/bearclosures.htm

The Yellowstone park site has mini-videos well worth watching:
“Park regulations state that visitors must stay more than 100 yards away from bears and 25 yards away from other wildlife. Many visitors see large wild animals that seem tame and therefore approach far closer than they should. These videos are intended to convince everyone that it is unwise to approach wild animals even if they seem tame.” One shows an elk redoing the paint job on a Cadillac.

Watch the videos at: http://www.nps.gov/yell/learn/photosmultimedia/safetyvideos.htm

(When we watched them they took quite awhile longer than advertised to watch, as they had to rebuffer a few times, but they are worth it. No, we’ve never gotten even close to having anything like this happen.) 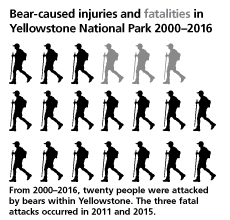 Every year people are badly burned when they fall into thermal features in Yellowstone.

The boardwalks are narrow and do not always have railings. Running, playing or bringing dogs on these would be dangerous:

A park news release said: “Yellowstone park visitors are reminded that for their own safety it is important to stay on boardwalks and designated trails while viewing all thermal features in the park. Scalding water underlies thin, breakable crusts; many geyser eruptions are unpredictable, and many thermal features are near or above boiling temperatures. Boardwalks and trails help protect park visitors and prevent damage to delicate formations.”

Schefflin and Goetz pleaded guilty to the violation of thermal trespass. On September 10, 2019, at about 8:30 p.m., employees and visitors witnessed two individuals walking on the cone of Old Faithful Geyser and reported it to park dispatch. A ranger contacted and cited Schefflin and Goetz.

Sentencing for each included:

“Visitors must realize that walking on thermal features is dangerous, damages the resource, and illegal. Law enforcement officers take this violation seriously. Yellowstone National Park also appreciates the court for recognizing the impact thermal trespass can have on these amazing features,” said Chief Ranger Sarah Davis. 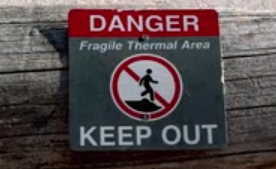 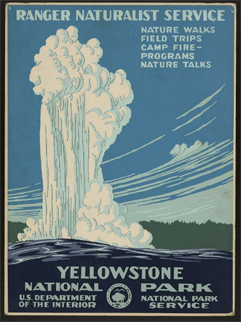 Is there a bulge under Yellowstone Lake?

Frequently asked questions about recent findings at Yellowstone Lake is at:

Yellowstone Monthly Activity Update — Each update is compiled for the previous month and posted in the first week of the new month.

and more FAQs at:

QUESTION: Do scientists know if a catastrophic eruption is currently imminent at Yellowstone?

ANSWER: There is no evidence that a catastrophic eruption at Yellowstone is imminent, and such events are unlikely to occur in the next few centuries. Scientists have also found no indication of an imminent smaller eruption of lava.

The Yellowstone caldera is in about the center of the park, including the northern part of Yellowstone Lake. Picture a semi-circle encompassing the area from Madison to Norris to a bit east of Canyon Village, then south to east of Fishing Bridge and Bridge Bay then continue west to south of Grant Village and west of Old Faithfull then finally back up to Madison. If you camp or stay in hotel at Grant Village, Old Faithful or Canyon Village you have literally slept on a caldera.

This display about the caldera details the cubic miles of material erupted by the Yellowstone Super Volcano in the last big eruption 164,00 million years ago versus Mount St. Helens and Crater Lake.

There are places out in Lake Yellowstone where vents have been documented: 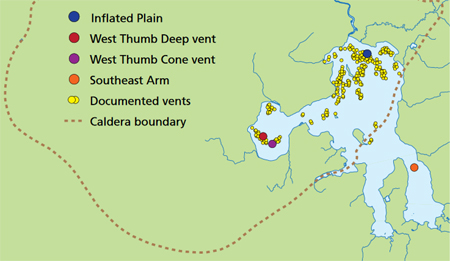 Grand Prismatic Spring, (in Midway Geyser Basin) is the largest hot spring in the United States, and the third largest in the world, approximately 370 feet (110 meters) in diameter and is 160 feet (50 meters) deep. Look for people on the boardwalks in the photo below to better visualize the size:

photo below used with permission from the photographer Ron Niebrugge: http://www.wildnatureimages.com/

Video of of Grand Prismatic Spring, with links to other Yellowstone videos:
https://www.nps.gov/yell/learn/photosmultimedia/vl_grandprismatic.htm

The birds with the red on their head above are Sandhill Cranes, perhaps the ones we look most forward to hearing. 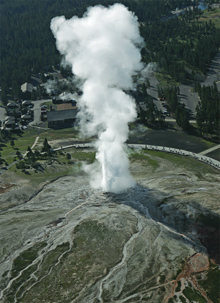 Live shots of Old Faithful geyser (in Yellowstone) and the Upper Geyser Basin,

The most famous of 200 to 250 active geysers in Yellowstone, Old Faithful (in the Upper Geyser Basin) erupts on the average every 65 minutes (33 to 110 minutes), for 1 1/2 to 5 minutes, with a height of 106-184 feet (32–56 m) with an average near 130 feet (40 m). See https://www.nps.gov/yell/learn/nature/oldfaithfulgeyserfaq.htm for an app of the next eruption prediction. “The famous geyser currently erupts around 17 times a day and can be predicted with a 90 percent confidence rate within a 10 minute variation.”

Plan to have enough time to find parking and get to where you can see the eruption: 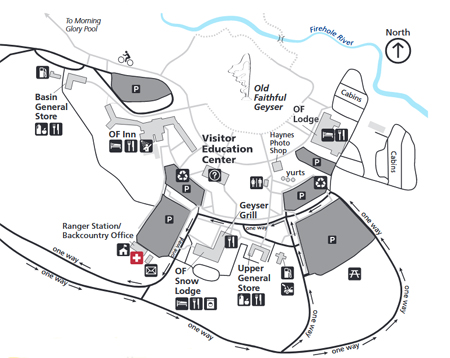 Ansel Adams took this photo of Old Faithful at a time of day most people are not watching the eruption: (photo courtesy of the National Archives)

Our favorite memory of an Old Faithful eruption was at night with light from a full moon and lightning from a thunderstorm in the background. 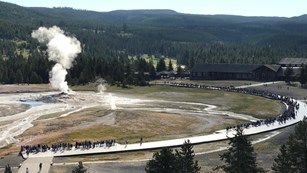 As usual, you can miss the crowds if you are out early. (above and below NPS photos of a typical crowd waiting for an eruption of Old Faithful Geyser) 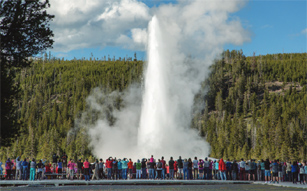 If you are out early you have a better chance of getting the photo you want.

Elsewhere in the nearby Upper Geyser Basin,
https://www.nps.gov/yell/planyourvisit/exploreoldfaithful.htm

get up in the middle of the night and you might be lucky enough to get a photo as good as this one of Castle Geyser and the Milky Way from the NPS: 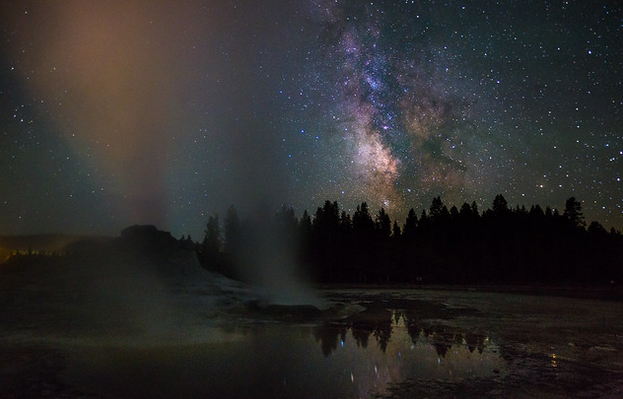 You can hike (1.6-mile (2.6-kilometer round trip) to where this next photo was taken:
https://www.nps.gov/thingstodo/yell-trail-observation-point.htm

Old Faithful Hotel is the one you see in the picture.
Info about the hotels and cabins in Yellowstone is at:
http://www.ynp-lodges.com/

According to a Yellowstone fact sheet

photo below used with permission from the photographer Ron Niebrugge http://www.wildnatureimages.com/

Approximately 50 species of other mammals, including 171 wolves and 20-35 cougars

5 species protected as “threatened or endangered”

Approximately 80% of forest is comprised of lodgepole pine

One of the world’s largest petrified forests

Which is the best place in Yellowstone to watch wildlife, Hayden Valley or Lamar Valley?

Wolves: Lamar valley
Grizzly bears : Hayden Valley or Lamar Valley are equally good.
Birds: “For bird photography, Lamar has a slight edge over Hayden during nesting season, but for the real bird-nerds, head to Hayden Valley.”
Bison: “For sheer year-round numbers and just a teasing hint at the rich bison-covered plains seen by Lewis and Clark, the win goes to Lamar.”
Moose: “There is almost no moose food in Hayden Valley – no willows or cottonwoods along the river, no aspens on the hillside. Lamar Valley has seen an increase in moose sightings over the last decade as the deciduous trees and shrubs grow back after decades of overbrowsing by overpopulated elk. Moose are one of the most heat-sensitive animals in the Park, so look for moose early in the morning or on cold rainy days.”
Elk: Lamar

Lamar Valley . . . “is home to bighorn sheep, pronghorn (in the snow-free months), deer, and the non-native mountain goat”

The diary of artist Thomas Moran is at:
http://www.nps.gov/yell/historyculture/thomasmoransdiary.htm

Info on selecting binoculars is at:
http://www.birdwatching.com/optics/binoculars1.html

Photo of Yellowstone Fall below by David Whitten http://www.davidwhittenphoto.com/index.html?yellowteton.html~home 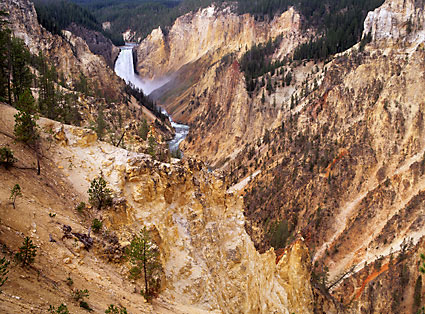 Each visitor center is different. At each you can get boat and backpack permits

and also pick up the paperwork to earn your Yellowstone Junior Ranger badge, which you will want to start at the beginning of your trip. 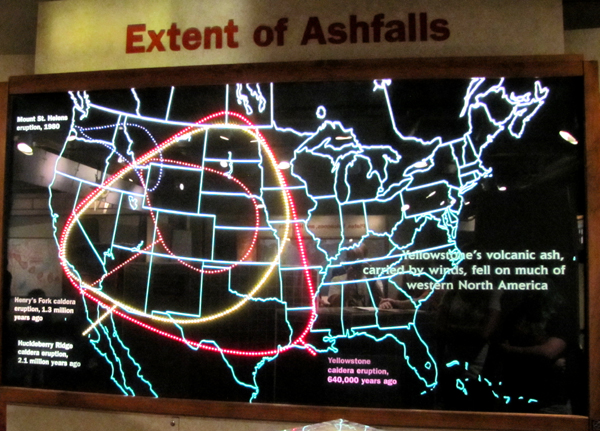 At Canyon we really enjoyed the projects to earn our Yellowstone Young Scientist award:

Your safety in grizzly bear territory. 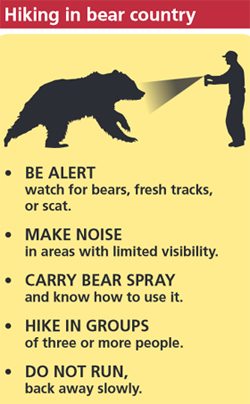 Recommended reading
Yellowstone Grizzly Bears: Ecology and Conservation of an Icon of Wildness

” . . . Bears can see in color, can hear in the ultrasonic range, and possess an incredible sense of smell.. . Heaviest Known Body Mass in the Greater Yellowstone Ecosystem: Adult male 715 pounds (324 kilograms); Adult female 436 pounds (198 kilograms)
Speed: 35 to 40 miles per hour (56 to 64 kilometers per hour)
Strength: 2.5 to 5 times greater than humans

. . . 1944: Olaus Murie . . . experimented with electric cattle prods to teach bears to avoid campgrounds, but concluded “the bear learns to recognize the particular person or car that administers the shock or other punishment, and simply avoids that person or car in the future, but does not fear other persons or cars.”

(how to use tracks and scat to distinguish species) 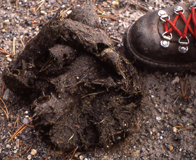 There is more info about the De Anza College Outdoor Club trip at:

includes a link to The Journals of Lewis and Clark

Clark: “…bison were so numerous and loud that the men had difficulty sleeping.” 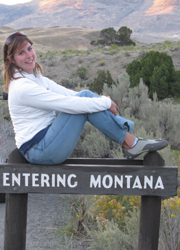