This page has photos and maps, descriptions of access to the six classic places to take photos of Bridalveil Fall in Yosemite valley, some considered the best location to photograph Bridalveil Fall.

Coming into Yosemite valley on two-way Highway 140, (El Portal Road, see the left of the map below) after you cross the Pohono Bridge, the road becomes (usually) one-way.

.45 miles east of the bridge there is a small turnout (Roosevelt turnout) on the right hand side of the road, across the road from a large meadow, with this view of Bridalveil Falls (which drops 620 feet):

and a large sign the commemorates the general location of where John Muir and President Theodore Roosevelt camped in 1903 when Muir toured the president through the park. 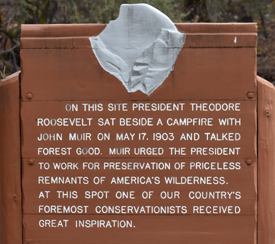 See also: How to find the location of John Muir’s cabin (hang nest) in Yosemite Valley.

NPS photo of Tunnel View (the massive rock form on the left is El Capitan, in the background in the center is Half Dome, the waterfall on the right is Bridalveil Fall: 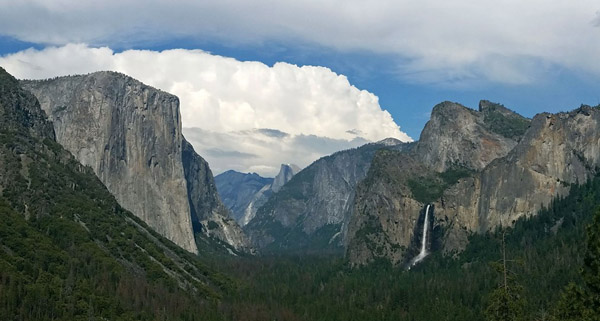 This next photo is courtesy of Tom Ingram Photography, all rights reserved tomingramphotography 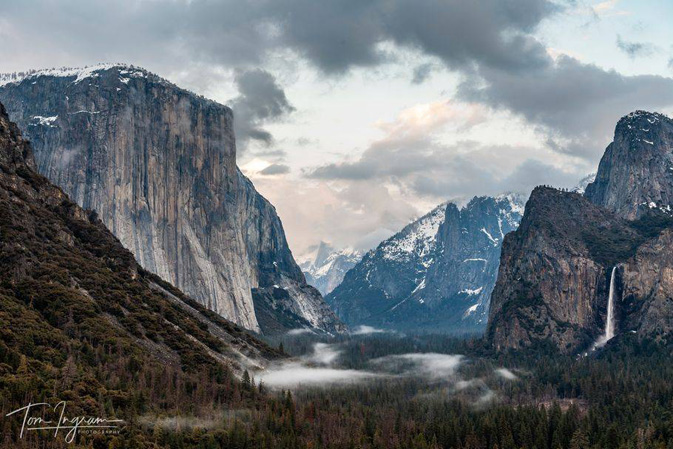 This was painted by Andrew Melrose in the vicinity: 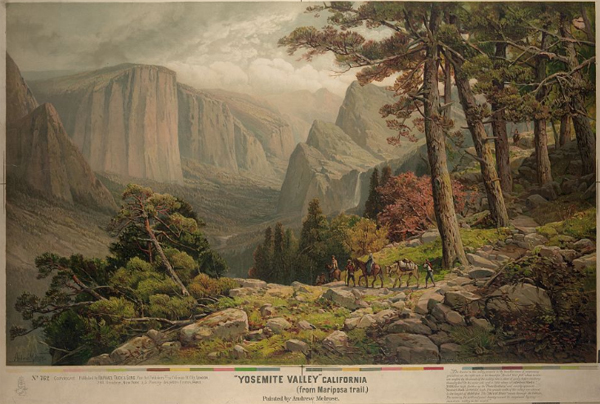 Below a photo from the NPS webpage:
https://home.nps.gov/yose/learn/historyculture/thomas-hill.htm

The website said: View of the Yosemite Valley, 1865, by Thomas Hill, which
served as the backdrop for the President Obama’s 2009 Inaugural Luncheon in Washington D.C.
Courtesy of Collection of The New-York Historical Society 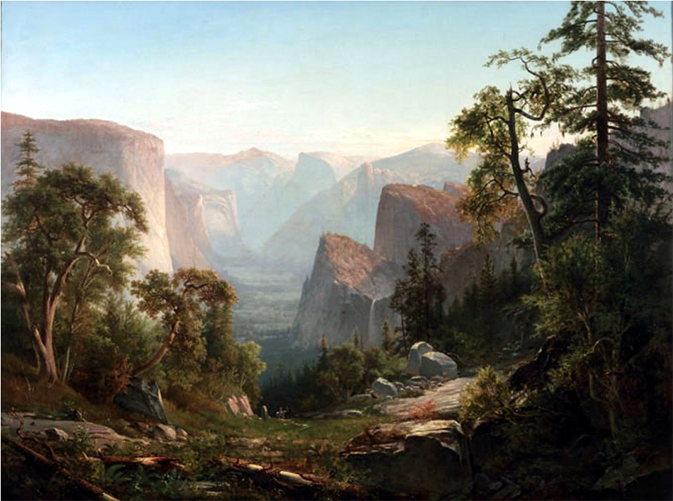 Coming into Yosemite valley on Highway 41, just before the valley, about 7 miles after Wawona, you go through a long tunnel just above the valley floor. Or you can get to Tunnel View from Yosemite Valley by driving on Northside drive until the Pohono Bridge, then making a left over the river and continuing until a right hand turn ( almost U-turn) then up the Wawona Road towards Wawona and Glacier Point road, (this almost u-turn is the same as you would take entering the valley on Highway 140 to go to Tunnel View) as in the map below

Coming from highway 41, after going through the tunnel, slow down and put on your right blinker at the end of the tunnel and pull carefully into the small parking lot. Walk across the road (watch out for drivers watching the scenery and not seeing you) to the main viewpoint. Coming from Yosemite Valley, watch for the parking lot on the right before the tunnel. 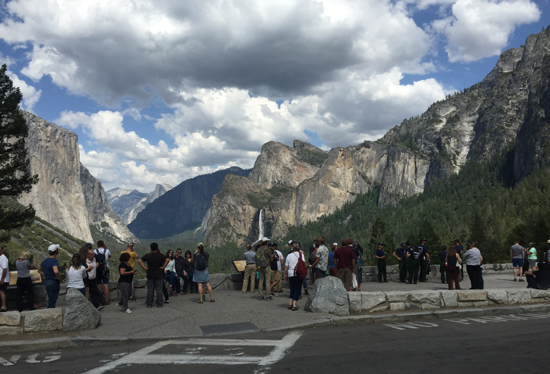 This view is worth stopping for even if you are running late and even if there is rain or snow falling. The Yosemite Fund (now called the Yosemite Conservancy) and the National Park Service funded a remodel in 2008 with educational exhibits, expanded handicap accessible viewing area and improved traffic flow. Thousands of people stop each day in the summer.

Webcam near Tunnel View located on a dome near the Wawona Tunnel:

More photos of the view from the parking lot at tunnel view:
photos below by Quang-Tuan Luong/terragalleria.com, all rights reserved. 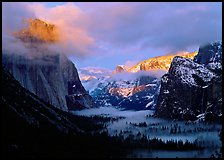 From tunnel view, on your way down into Yosemite valley, before you join the main road that circles around the valley, there is a turn to the right to a parking area (Bridalveil Fall parking lot)
for the short walk to the base of Bridalveil Fall.

The Bridalveil fall parking lot is being remodeled to look something like this: 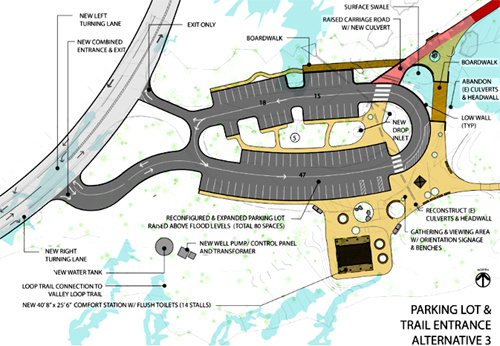 The parking lot loop is in black and the walk is in yellow in this map: 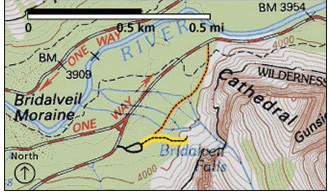 It’s only a five minute walk to the base of the fall.

The park service cautions that the paved walkway can be slippery, especially in the winter.

“The rocks and boulders above the viewing platform are slippery even when dry; stay safe by staying on the paved trail. Scrambling off trail in this area has led to serious injuries.

If you choose to park along Southside Drive, when getting out of your vehicle, watch for traffic and be cautious opening car doors and crossing the road.”

https://www.nps.gov/yose/getinvolved/bridalveilea.htm explains work on restoration of the Bridalveil Fall area.

The main viewing platform could get very crowded mid-day: 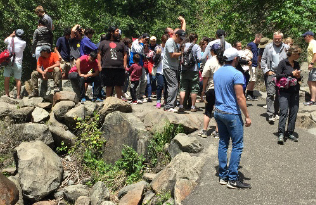 The plans include better viewing platforms: 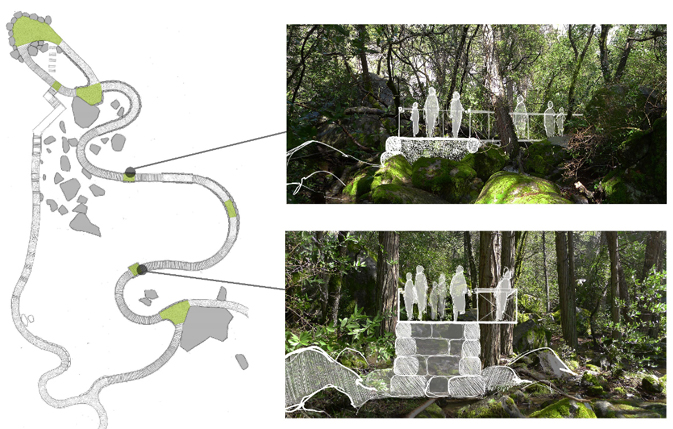 Here is a view of the fall from this walk: 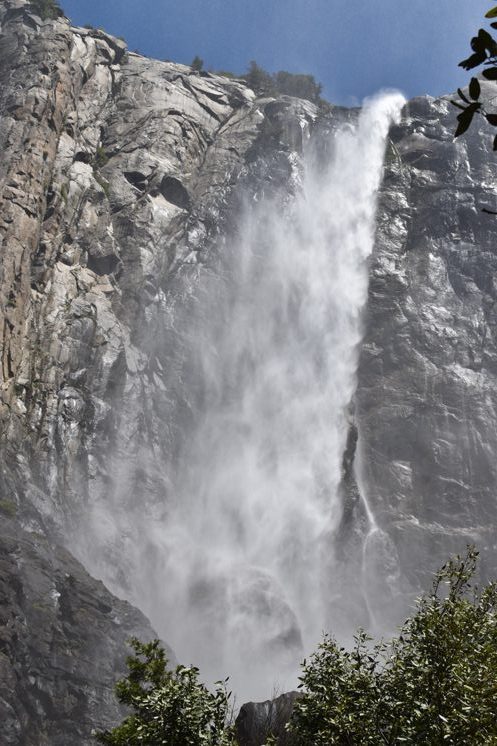 The wind can blow strong enough to lift some of the spray back over the top of the waterfall: 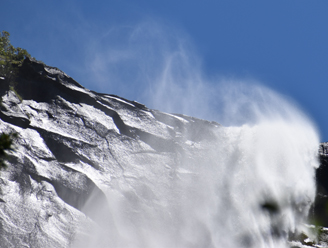 This warning sign, often ignored, is at the viewing platform at the end of the short trail. (The picture below is from: A Common Yosemite Search and Rescue where it says: “Danger signs are not there to ruin our fun. They are often posted in places with a large accumulation of past accidents.”) The NPS map below has the parking area closest to Bridalveil fall (Bridalveil Fall parking lot, mentioned above) marked with a large P
and in almost the center of the map, a smaller P with the location of the long paved turnouts pictured below.

Further along (usually one-way) Southside drive into Yosemite valley, (0.25 miles east of the intersection of Southside Drive and Wawona Road) there are long paved turnouts on both sides of the road with a view of El Capitan on the left 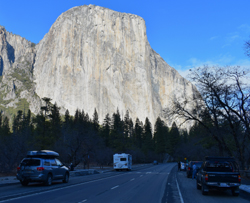 and Bridalveil Fall on the right, where a long trail to Bridalveil fall comes out to the road. Watch out as you drive through here for people standing in the roadway to look at the view, get a picture, often not looking out for oncoming traffic:

This section of Southside Drive, know as Bridalveil Straight 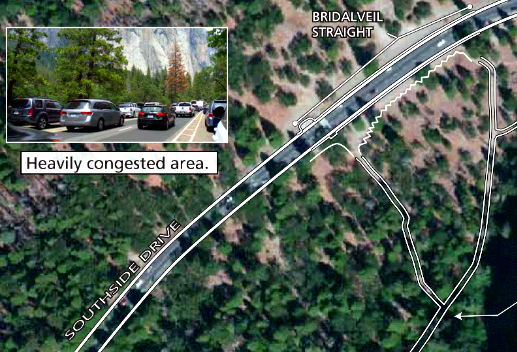 was redesigned in 2022. Note that if you want to stop here, as you approach you should be in the left hand lane to find a parking space, as much of the right hand lane is a no parking zone designated for shuttle buses and tour buses. (See the four blue stripes in the map below.)

Exiting Yosemite Valley on usually one-way Northside Drive (top of the map below), there is a long turnout made for people to get yet another view of Bridalveil Fall .

At the map above, at the top right of center, look for Northside Drive (in brown letters) and just below that, to the left of the “M” in Merced River (in blue letters above a blue river drawing) you can see where the road goes closer to the river. Get in the left lane, slow down, and look for this turnout: 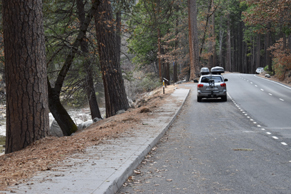 If the turnout is full there are two more small paved turnouts a little further along the left side of Northside Drive. Watch carefully for traffic walking along the road.

At the turnout viewpoint, here is the view of Bridalveil Fall in December: Bridalveil fall in September, with just a wisp of water: 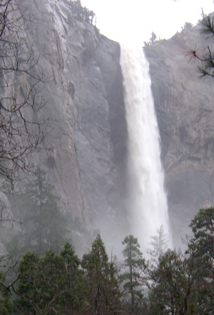 The Bridalveil Fall (height 620 feet) drainage was never scoured by glaciers. We learn in The Waterfalls of Yosemite, by Michael Osborne, that “the watershed of Bridalveil Creek is about 25 square miles in area and largely forested. Because its moderately large watershed has especially deep soils, Bridalveil is Yosemite’s only tributary waterfall that does not become dry. The others usually go dry in the Autumn, but are revived by November rains.”

There is a display describing the viewpoint, and glaciation that caused the hanging valley the fall flows from:

with a drawing of the glaciation:

A bit further along usually one-way Northside Drive, Valley View, also known as Gates of the Valley, (seen on the way out of Yosemite Valley, the small parking lot is on the left hand side)

and a close-up with your telephoto of Bridalveil Fall: If you are lucky you might see a Water Ouzel (also known as a Dipper) swimming in and out of the ripples very near you, any time of year, including this photo taken in December:

The N.P.S. Merced River Plan, (see page H-35) has projects to improve views by removing trees. It says about the view from Valley View:

“Valley View is at the west end of Northside Drive. This is the vista on the 2010 quarter from the US Mint’s “America the Beautiful” series. The viewpoint is part of the Yosemite Road Guide (marker V11) which describes it as being a view of the “gates” of Yosemite with El Capitan on the left and Cathedral Rocks on the right. The landscape of the surrounding Yosemite Valley is reflected in the calm water of the Merced River. The primary objective in managing the vista is to open the mostly obscured view of Bridalveil Fall, and to reduce the number of conifers encroaching on the meadow. There are a large number of dead trees from a controlled burn in 2007. The area from which trees will be removed is approximately 4 acres. There are 117 snags within this area, and of these, those less than 12” dbh will be removed and larger snags of greater habitat value will remain.” 519 trees (175 Ponderosa, 327 Cedar and 17 Fir) will be removed.

This (1885 +/-) painting by Thomas Hill (photo courtesy of the Library of Congress) was done in the vicinity. 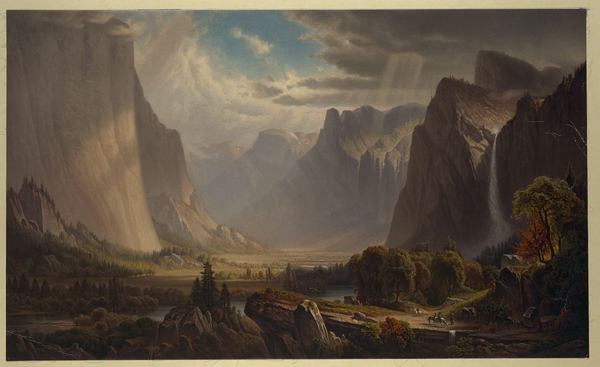 as was this (1871), also by Thomas Hill (photo courtesy of the Library of Congress): Below a photo from the NPS.

Lithuanian-born, William Zora, his wife Marguerite, and their two small children, spent the summer of 1920 in Yosemite, hiking, sketching, and painting the landscape. Inspired by Ralph Waldo Emerson’s essays about nature, William’s watercolors were Fauvist in style, emphasizing bright colors and simplified forms. “There are things one does for the pure love of form and color, in the easy abandonment to the moods and the fancies of the moment. These are my watercolors.” ) 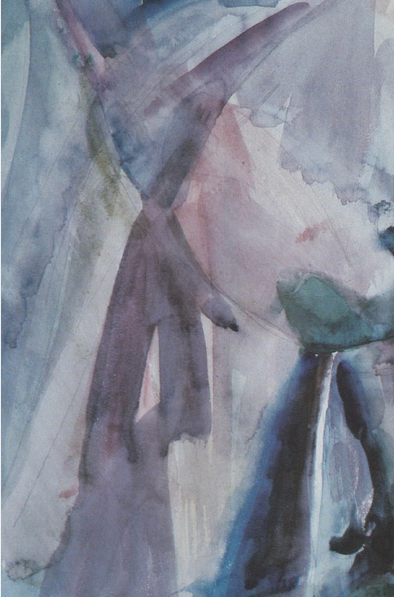 You can buy a Bridalveil Fall tshirt, poster or art work online from the Yosemite Conservancy https://shop.yosemite.org/

The Yosemite Assn used to have a page of photo tips from photographer Michael Frye which included:

“Nice late-afternoon sunlight strikes Bridalveil Fall about an hour-and-a-half before sunset (about 6:30 p.m.) in May and June.”

Places to take photos of El Capitan in Yosemite National Park, (with maps)

Using a drone is illegal in Yosemite National park, including for photography. See an index of rules and regulations webpages.

Parking and traffic jams in Yosemite valley tips and tricks has the above advice, with maps of each of the three major day-use parking lots, with advice to help you NOT get a Yosemite National Park traffic or parking ticket, and not contribute to preventable traffic backups. And some details of where you can’t park in Yosemite, or can’t park without a permit.


a map of and floor plans for the Ahwahnee cottages is at:
Yosemite Ahwahnee Hotel cottages, (bungalows / cabins) floor plans and map


You can find basic to extravagant, (a few with a dress code),
casual, fast (grab and go)
or with table-side service,
indoor and outdoor food service
at multiple locations in Yosemite Valley, as well as four grocery stores
all of which are served by the Yosemite valley free shuttle bus.