The loop (or figure eight) trail for the walk through and around Cook’s Meadow in Yosemite Valley, a favorite of many visitors,

but people can also access it starting at free Yosemite Valley bus stop #11,

as well as on the drive into Yosemite Valley, by parking at some spaces on the left hand side of the main road (Southside Drive) just before the chapel.

This webpage has maps and descriptions of each of these Cook’s Meadow trail / bike path / walkway starting points (also known as trailheads).

Along each route, you can see views of Half Dome, 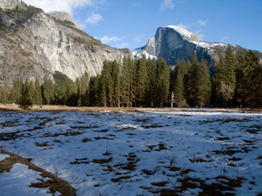 Glacier Point, Sentinel Rock and a dramatic display of flooding in Yosemite valley.
Yosemite valley has become a lake due to flooding many times in history and you can visualize the depth standing on Superintendent’s Bridge, which has a display that you can stand next to, showing the depth of the water during 5 major Yosemite valley floods.

The water overflowed the bridge to these heights as measured from the bridge deck:

(If this display were to be removed, you can still visualize the depth of the water by seeing that a person 5 feet tall would be, in effect, under water during the 1997 flood.)

The park service asks that as you enjoy the meadow, you “stay on the path.

Do not venture out into the meadow, which causes trampling and damages the ecosystem, which is important to the many plants and animals that thrive in this fragile environment.”

Unfortunately some people ignore the signs and climb over fences.

The park warns: “Boardwalks are slippery when wet and even more so when covered in snow or frost.”

Cook’s Meadow MAPS (and below this section, five routes)

Free Yosemite Valley shuttle bus stops 5 and 9 are across the road from each other at the main Yosemite Valley Visitor Center. The map below (courtesy of the NPS ) shows the visitor center, the lower Yosemite falls loop trail, (in orange) and the Cook’s Meadow loop trail (in yellow): 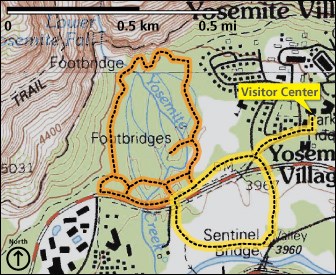 The park service describes the yellow loop above as

but the time you take to enjoy the Cook’s Meadow loop, especially if you enjoy the entire double or triple loop walk and take lots of pictures, and stop for a picnic, can be hours.

Take a look at the lower section of the figure-8-ish Cook’s Meadow loop, and you can spot where Superintendent’s Bridge crosses the Merced River. In this photo map there are two river crossings below the words Cook’s Meadow, one at the left for Superintendent’s Bridge for foot traffic and bikes only, no vehicles, and one towards the right, at the very bottom center of the photo map, for Sentinel Bridge, on a major road with vehicles. 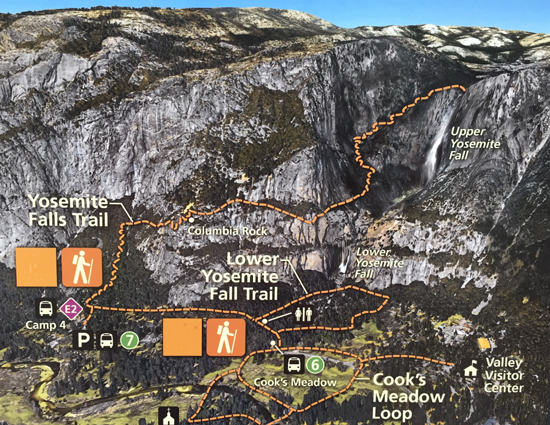 The section of a shuttle bus map below shows stop #6 at the top center and a dotted red line showing the path to Superintendent’s Bridge to the south. The bridge is just below the letter “M” in the words Yosemite Lodge.

Details about each of the routes:

– – – – – – To go from the Ahwahnee Hotel, Curry Village (briefly named Half Dome Village) or the campgrounds, take the free shuttle bus to the visitor center shuttle stop #5.

– – – – – – To go from the main visitor center (see again, the yellow dotted line and the words visitor center on a yellow background in one of the maps above), go out to shuttle bus stop number 5 (on the left in this photo below)

turn right from the bus stop and go along the pedestrian or bikes walkway beside the shuttle bus only road.

Just before the shuttle bus only road intersects with a side road to employee housing, there will be a wide crosswalk to the left:

After that another crosswalk goes across northside drive. Be careful as many of the drivers do not stop for people in crosswalks. They might be having trouble finding parking or just be looking at the scenery, not at you.

This path will then take you across a boardwalk where you can get a photo of upper Yosemite Fall behind tall azalea bushes, here just starting to bloom in May: 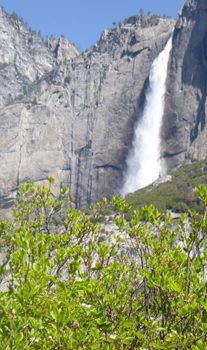 with nearby (likely blooming in August / late summer) “showy milkweed (Asclepias speciosa), native to western North America, is both a home to the milkweed beetle and a vacation layover for the monarch butterfly.” 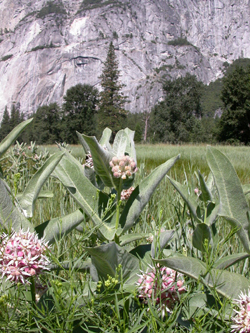 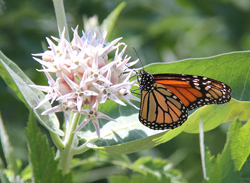 The far end of the boardwalk on this route is at the small parking lot at shuttle stop 11 (Sentinel Bridge).

Near sunset you will find lines of photographers on nearby Sentinel Bridge waiting to see if Half Dome turns gold or pink. 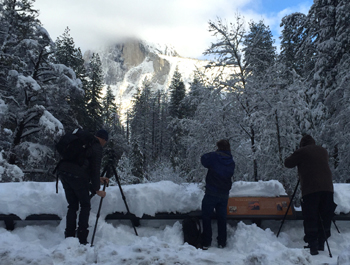 This parking lot is one of the best places to take pictures of moonbows (lunar rainbows during a full moon in spring) on upper Yosemite Fall. 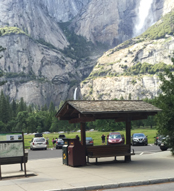 go through the parking lot to a path / trail, some times of the year with large puddles, (dotted black line going to the left from the number 11 in the green circle, in this mini-map):

As you walk from the far side of the parking lot at shuttle stop #11, you may see a sign showing the depth of the water at that location during the 1997 flood: 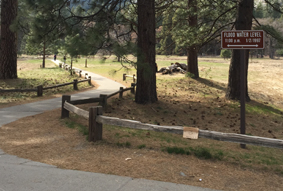 A 360 degree view from Cook’s Meadow, steps away from shuttle bus stop #11.

As you follow the pathway, you will be roughly parallel to the Merced river. Past this the walkway goes over a footbridge across the often wettest part of the meadow.

On the right, a path thru the meadow before the boardwalk was built:

Some seasons of the year you can see Mallard families swimming and eating in the marsh,

and hear more often than you see, many Red-Winged Blackbirds singing.

After the boardwalk the pathway comes to an intersection with the pathway from shuttle stop 6, and you take a left hand turn to go towards the bridge. (Again, the red dotted line in the shuttle bus mini-map above)

When you come up the stairs onto Superintendent’s Bridge from the north, either from shuttle stop 11 or stop 6, a metal sculpture is on the left hand side.

The Merced River flows through Yosemite valley under many bridges. In season you will see people rafting along part of the river, right under the bridge.

To get your bike up and down the stairs more easily, use the strip of concrete just to the sides of the steps to roll your tires on. 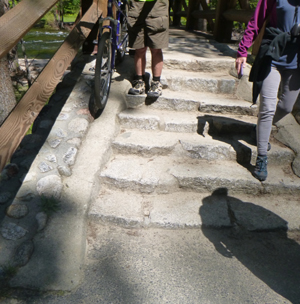 – – – – – – Another way to walk Cook’s Meadow and to Superintendent’s Bridge is to take the free Yosemite National Park valley shuttle bus to stop #6 . Perhaps after you walk the lower Yosemite fall loop, or use the restrooms along that walkway, go back to shuttle stop six, and from there, looking across the road at a cross walk near the bus stop, you can see a meandering path leading to a pedestrian bridge over the river (Superintendent’s Bridge). 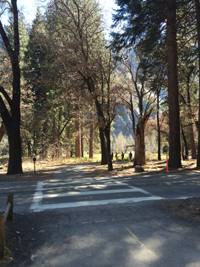 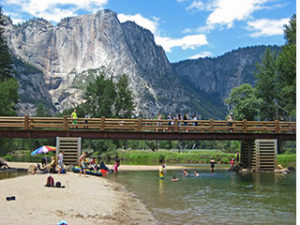 Swinging Bridge no longer swings, but it did when this picture was taken in 1934: 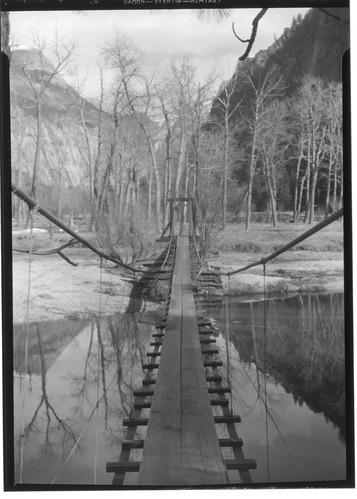 Before you cross Swinging Bridge, if you go a bit to the right, you can, (spring / early summer), see the multiple cascades, ranging in height from 50 – 500 feet, of Sentinel Fall. 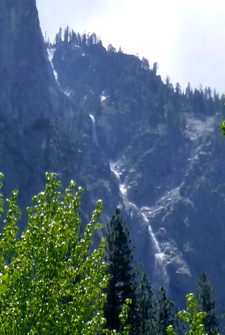 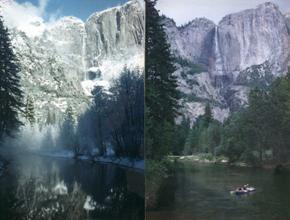 Below is a NPS photo of Yosemite Falls during peak flow on May 23, 2003. Notice how high the river water level is and how much more flow than in the photos at the top of this page from April, February, and later summer with more normal flows. 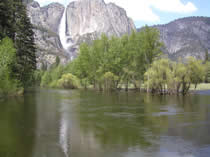 After crossing Swinging Bridge, (restrooms at this location), follow a wide bike path that runs alongside the main road (Southside Drive, brown diagonal arrow on the right hand side of the map below) until you get to the Chapel vicinity, then go up a path to the south end of Superintendent’s Bridge, as described above.

Along the bike or pedestrian path parallel to Southside drive, there is a boardwalk that leads out to the river. 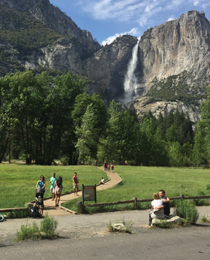 In the NPS photo below of flooded Sentinel Meadow taken May 16, 2005, you can just make out the sunken edge of the boardwalk across the meadow between the two posts on the fence and can just see Yosemite Falls thru the low clouds in the background. Next to it is the same place in June, 2005 and again in February 2008 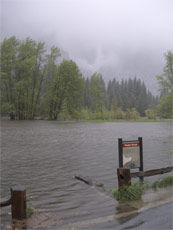 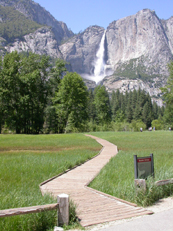 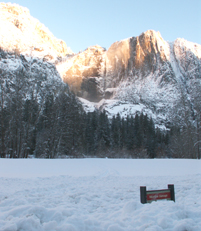 – – – – – – You can also walk Cook’s Meadow and find Superintendent’s bridge, on your drive into Yosemite valley, by going directly across Southside Drive from the Chapel and walking a path to the bridge. (Again, see the section of shuttle bus map above and follow the dotted red line from the Chapel going north.)

The bridge is in the upper left hand side of this photo taken from the Chapel area:

Below, a NPS photo of Superintendent’s bridge being rebuilt after the 1997 flood: 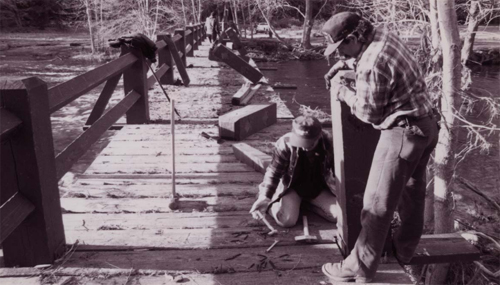 Below: the line on a sign (that has since been removed), next to Superintendents Bridge in the upper right of this photo shows the water depth during the January 1997 Yosemite valley flood:

Press releases and details about recent Yosemite valley floods, including April 7, 2018 (the largest flood in 21 years), January 7-9, 2017 and May 16, 2005, are at: Yosemite Valley spring runoff and flooding / Yosemite snow pack

How much water has been flowing the last few days?

To see the water flow at Happy Isles where the section of the Merced River that fills Vernal and Nevada falls enters the valley, click on this webcam link:

You can also find a Weekly Video & Image Archive.

How cold is the water in the Merced River in Yosemite valley right now? Scroll down at:
https://waterdata.usgs.gov/nwis/uv/?site_no=11264500


The use of cell phones for photography (with or without a selfie stick) has made preventable injury or even death by selfie common. They were only taking a selfie

The Yosemite National Park rangers would like you to call them
if you see a bear in Yosemite,
no matter where it is or what it is doing.

Since 2003 there has been a note in the Yosemite Guide: “REPORT ALL BEAR SIGHTINGS! To report bear sightings, improper food storage, trash problems, and other bear-related problems, leave a message for the Bear Management team at: 1 (209) 372-0322. Your call can be made anonymously.” 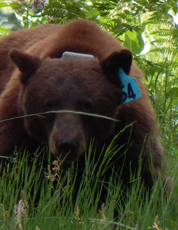 If you can, in all the excitement, try to notice if the bear has a tag (usually on the ear), the color of the tag and if possible, the number on it (the tag is large enough that with a telephoto lens you should be able to read the number).

From the Yosemite Daily Report newspaper:
“It is extremely important to remember to yell at bears that are in and around development, even if they are foraging on natural food. Though it is very tempting to get close for a picture, or just to watch these incredible animals, it is important not to give into this urge. Yelling at them if they are in residential areas or near people is critical to keep bears natural fear of humans. Giving bears plenty of space. When bears become too comfortable around people, they will often start causing damage to structures and vehicles, or will even become too bold around people, creating safety concerns.”

And the Yosemite Daily Report also said:
“Scare bears when you see them. . . in developed areas- Yell like you mean it!
Make as much noise as possible, try waving your arms, stomping your feet
or anything to make you look intimidating and to get the bear to run away.
We know it’s fun to see bears and it can feel mean to scare them,
but this is a simple way to truly help save a bear’s life.”