Google maps 360 degree view and a second view you can scroll around of the campground.

The map below has the campsite numbers, location of the restrooms, the trailhead for the Upper Yosemite Falls hike and the location of the largest boulder within the campground, Columbia Boulder, (or Big Columbia), which has the “world’s most famous boulder problem” – the route named “Midnight Lightning.” Swan Slab is a bit north, off of this map, but you can find the location by using Google maps and searching for, you guessed it, Swan Slab.

The closest Yosemite Valley free shuttle bus stop, number seven, is across the road on the far left of this map. It is NOT actually where the gray square on the NPS map is, it is farther off the road a bit past the day use parking area.

(As of fall 2017: “the (Camp Four) parking lot is being expanded, bringing the capacity to 130 vehicles . . . A new comfort station is also being constructed in which showers will be included. This will be the first park campground that will provide shower facilities for people staying in the campground.”) As of the start of 2019 it looked mostly completed. When the shower house is finished you will find it off of this map to the lower right. 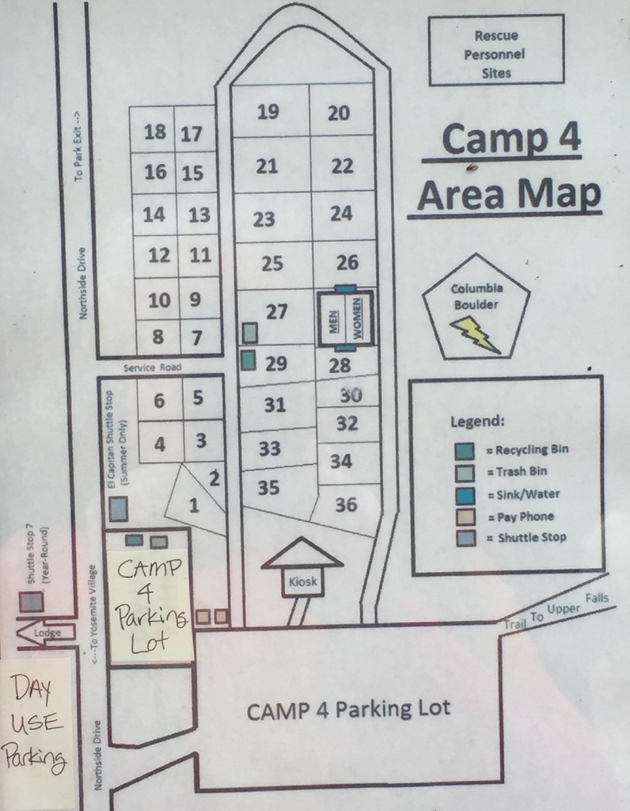 People parking at the Camp 4 campground parking lot(s) MUST have a Camp 4 camp space permit, 24 hours a day.

If you have more vehicles than spaces allowed, see parking and traffic jams in Yosemite valley tips.

“Late May through Early September

As part of a pilot program in 2019, campsites are available only by daily lottery, one day in advance, via recreation.gov beginning May 22 (the first lottery is on May 21). The lottery is open from midnight to 4 pm Pacific time each day, with results notifications soon thereafter.

A non-refundable lottery fee will be charged (cost will be announced shortly) per application (up to 12 people). The camping fee (only charged with a successful lottery application) is $6 per person per night.

Each person (not just the primary applicant) must check in at the campground using a valid photo ID. (Minors must check in but do not need a photo ID.) Six people will be assigned to each campsite; people in one group may be assigned to different campsites. You can register for up to seven nights.”

Official details on how to register once you get to this first-come, first served campground

OR on how to use the lottery are at:
https://www.nps.gov/yose/planyourvisit/camp4.htm

(From the park website: “Within Yosemite National Park, you may not sleep in your car or RV except in a campsite that you’re registered to stay in (except at Camp 4, where sleeping in cars is not allowed because it’s a walk-in campground). Sleeping in your car along the side of the road is also not allowed.”)

and read about climbing regulations, the reasons behind them and practical advice on how to follow the rules, including fixed ropes, permits and sleeping on big walls, food storage, trash and human waste while climbing, bouldering, slacklining, and bolting ethics at: https://www.nps.gov/yose/planyourvisit/climbing_regulations.htm

Scroll around the almost 3,000 foot El Capitan Dawn Wall to look up close at climbers, a base camp of tents secured to the rock and follow their ropes during a 2015 free climb: 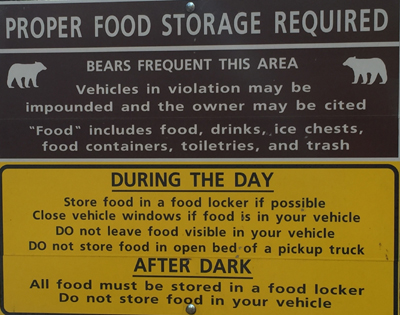 Setting your car alarm will not keep bears from getting into your car, but it can wake up everyone in the vicinity.

At bears you will find:
links to general info about bears,
then practicalities of camping and backpacking around bears, (Food Storage , what to do if you see a bear, how bears get into cars, info for backpackers) and lots of stories about bears getting into cars, tents, camps, etc., mostly geared towards De Anza College Outdoor Club trips around bears in California (especially Yosemite National Park) and Grand Teton National Park.
And the answer to the question:
Why don’t the rangers just move the problem bears?
and the question:
How can I keep a bear out of my campsite? (You can’t, but you can almost always keep it out of your food.) 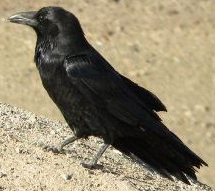 Ravens will take any food you leave unattended on a picnic table. Keeping food within arm’s reach is a wise idea at each of the picnic areas, hotels and campgrounds. The park warns: “If your food is stored improperly, you will be cited for improper food storage (fine of up to $5,000).” See also an index to over a dozen park webpages with park laws, rules, regulations and policies.

And for more choices of where to stay overnight in Yosemite Valley in Yosemite National Park (heated or unheated wood floored, canvas sided and roofed tent cabin / wood walled cabin without a bath / cabin with a bath / various designs of hotel rooms or campsites, see Yosemite overnight accommodations.

People climb over barriers meant to protect them, or try to swim above waterfalls and as a result slide over waterfalls in Yosemite. fatal, near fatal or close call incidents/accidents in camping, backpacking, climbing and mountaineering has press releases about them.

They were only taking a selfie

Thunderstorm and lightning safety includes a warning about not using your cell phone or IPod during a storm.

Below is a photo taken in December when the campground is not always as full as it is in warmer months.

and here in February when Camp 4 was closed due to falling trees after a major snowstorm, you can see snow covered bearboxes and picnic tables at the bottom of the picture 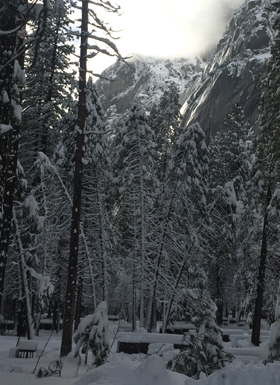 and here the view of Half Dome from the Camp 4 parking lot: 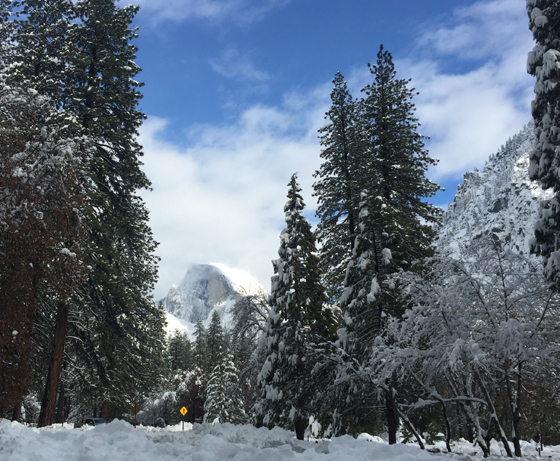 The original Camp 4 was actually in Leidig Meadow, and included part of what is now Yosemite Lodge. Yosemite Place Names.