Even when you have been to Yosemite Valley multiple times, the dramatic scale is still astounding. There are places in the valley where the narrow width is almost the same as the depth (height of the cliffs). The valley is only about one mile wide and seven miles long; vaguely a 120 degree angle L shape. The cliffs rise up 3,000 to 4,700 feet.

This introduction to Yosemite Valley is for students on De Anza College trips. I have used various views of Yosemite Falls to try to illustrate the size of the valley. But the only way to truly feel it is to go yourself, (in as many seasons as possible).

This picture (from the webpage backpacking advice) is taken from the top of Half Dome: 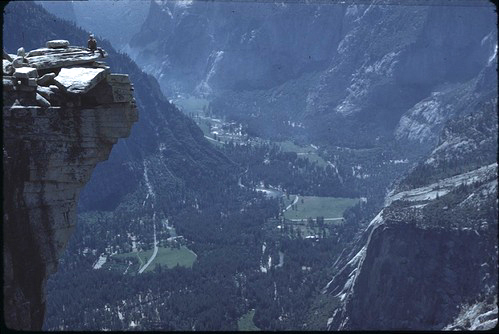 The picture below (courtesy of NPS) is was taken at Glacier Point, 3,242 feet above the valley floor on the south wall. The shot looks across the valley to Yosemite Falls on the north wall. The upper fall starts at 6,525 feet elevation and drops 1,430 feet. The lower fall starts at 5,044 feet and drops 320 feet. Adding in the distance of the middle cascade, the falls total 2,425 feet.

a bigger copy of the above photo is at: Yosemite Valley from Glacier Point

Here, a NPS photo of all three sections of Yosemite Falls with a rainbow, and another closer view from the trail to the upper falls: 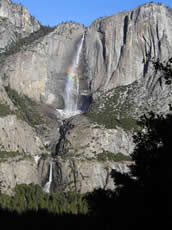 In the picture below left of Upper Yosemite Fall, taken while standing on the valley floor, the tiny tan dot in the lower left of the meadow at the bottom of the picture is a coyote looking for breakfast.

Four views of the same part of the top of the upper Yosemite Fall trail: 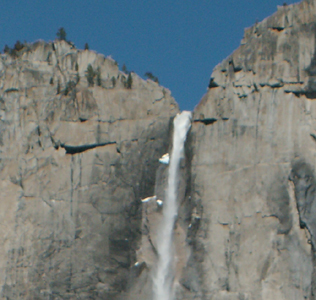 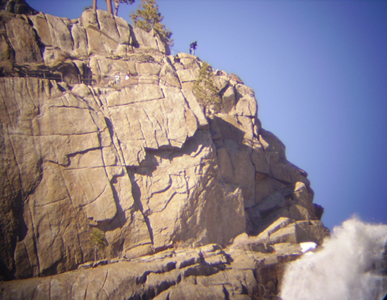 The most famous and accessible of these cañon valleys, and also the one that presents their most striking and sublime features on the grandest scale, is the Yosemite, situated in the basin of the Merced River at an elevation of 4000 feet above the level of the sea. It is about seven miles long, half a mile to a mile wide, and nearly a mile deep in the solid granite flank of the range. The walls are made up of rocks, mountains in size, partly separated from each other by side cañons, and they are so sheer in front, and so compactly and harmoniously arranged on a level floor, that the Valley, comprehensively seen, looks like an immense hall or temple lighted from above.

But no temple made with hands can compare with Yosemite. Every rock in its walls seems to glow with life. Some lean back in majestic repose; others, absolutely sheer or nearly so for thousands of feet, advance beyond their companions in thoughtful attitudes, giving welcome to storms and calms alike, seemingly aware, yet heedless, of everything going on about them. Awful in stern, immovable majesty, how softly these rocks are adorned, and how fine and reassuring the company they keep: their feet among beautiful groves and meadows, their brows in the sky, a thousand flowers leaning confidingly against their feet, bathed in floods of water, floods of light, while the snow and waterfalls, the winds and avalanches and clouds shine and sing and wreathe about them as the years go by, and myriads of small winged creatures birds, bees, butterflies–give glad animation and help to make all the air into music. Down through the middle of the Valley flows the crystal Merced, River of Mercy, peacefully quiet, reflecting lilies and trees and the onlooking rocks; things frail and fleeting and types of endurance meeting here and blending in countless forms, as if into this one mountain mansion Nature had gathered her choicest treasures, to draw her lovers into close and confiding communion with her.”

This photo of John Muir and Teddy Roosevelt at Glacier Point with Yosemite Falls in the background is from the National Park Service historic photo collection:

In the map below (courtesy of the National Park Service) 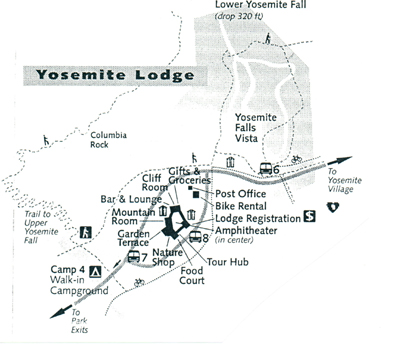 the dotted line in the upper left of the map is the trail from the valley to the base of, or the top of Upper Yosemite Fall.

More pictures and description of the falls hike are at:

You have a number of lodging choices of where to stay overnight in Yosemite Valley in Yosemite National Park, including campsites or

luxury or generic hotel rooms, suites with a bath

Ahwahnee hotel map webpage has summer and winter photos of rooms, balconies, parlors, (and the views from some of them), including the Presidential Suite with the huge balcony at the (south) far end of the Ahwahnee from the parking lot, the large third floor parlor with fireplace, two main building ADA Suites, featured room 417 with it’s own, small, private balcony, 5th floor rooms that share a balcony, the El Dorado Diggins Suite Jacuzzi tub, the 24 cottages / (bungalows / cabins), including the classic cottages that have an alcove between the bedroom and the bathroom with a bed you can fit a child on, and a door between the bedroom and alcove for privacy, sixth floor Mary Curry Tressider Suite, Library Suite, Underwood room, Sunroom Suite (Sun Porch), Mather, Spencer.

Parking and traffic jams in Yosemite valley tips and tricks has the above advice, with maps of each of the three major day-use parking lots, with advice to help you NOT get a Yosemite National Park traffic or parking ticket, and not contribute to preventable traffic backups. And some details of where you can’t park in Yosemite, or can’t park without a permit.